About a hundred Trump supporters gathered with assault rifles and handguns outside a polling station in Maricopa County, Arizona Wednesday night to demand that staff continue processing ballots. The disruption forced the polling center to shut down. 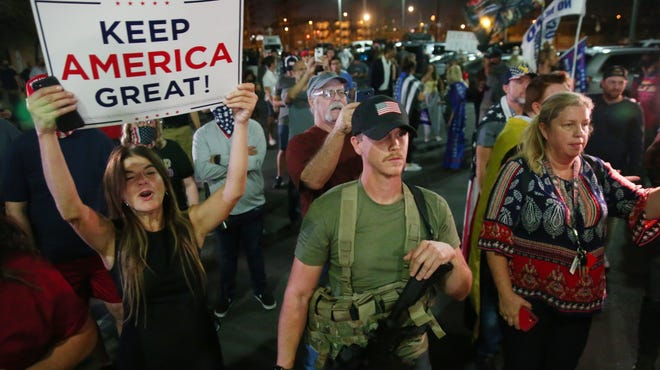 Last night, Donald Trump went on air to say he won the election.

Tonight, small right-wing protests emerged around the country. In Arizona, where the election is very close and the votes have not yet all been counted, right-wing vigilantes gathered at a polling station armed with assault rifles and handguns. They are demanding that all the votes be counted — which was what poll workers were doing until the protesters showed up.

Demonstrators also spoke out against Fox News, which had called Arizona for Biden early on election night, making it significantly more difficult for Trump to legitimately claim a victory. As of 7 p.m. on Wednesday, Biden maintained a lead over Trump in Arizona but 400,000 votes in Maricopa County had not been counted. Maricopa is heavily trending towards Trump but it is unlikely that this will turn around the whole state.  Nevertheless, the votes in Arizona are still quite close and could — although it’s unlikely — swing Trump’s way.

As a result of the protest, the polling station had to stop counting ballots and shut down, evacuating those inside the building.

BREAKING: Maricopa is now CLOSING due to concerns about unrest from sizeable crowds protesting vote counting per @CNN

Is this the “Antifa” Trump rants abt? U know, the ones storming the streets

Maricopa County, AZ ballot office is closing bc of concerns abt unrest from armed Trump supporters chanting “count the votes”

Though the county sheriff’s office showed up to guard the polling station, the police did not make any moves to arrest these protesters, who were disrupting the vote count and prolonging the election results. The police didn’t come with tear gas or pepper spray as they did in North Carolina when they severely repressed a peaceful “souls to the polls” group walking to a voting station.

Congressman Paul Gosar in the middle of this protest outside the county recorder’s office. Protestors, many armed, talking about debunked Sharpie conspiracy. Some chanting “count the vote.” County deputies now clearing reporters from the lobby out of caution. #12News pic.twitter.com/3yyMBiF3dU

But Arizona isn’t the only place where Trump’s base is mobilizing on his behalf. Small right-wing protests have also occurred across the country. But unlike in Arizona, in Detroit and Michigan, where Biden is sure to win by a landslide, Trump supporters have tried to stop the vote count to try to maneuver a Trump victory.

Trump loyalists try to disrupt and enter the absentee ballot counting center in Detroit. They banged on windows chanting “Stop the Count” as guards hold them off. (?@DonGonyea) pic.twitter.com/4nEJ1QPqZe

Meanwhile, there were also several protests by progressives and the left demanding that votes be counted. In New York City and in other cities across the country, they were met with violence and were arrested by the police. While the left is beaten and criminalized for protesting in the streets, the armed far right can disrupt voting stations without fear of repercussion. It’s clear what side the cops are on.