The Tokyo Olympics are an opportunity for athletes to demonstrate the pinnacles of physical accomplishment and show the best and worst of sports, but the games are controlled by a shady clique of capitalists and aristocrats. What could an alternative look like? Let’s check out the old Workers’ Olympiads. 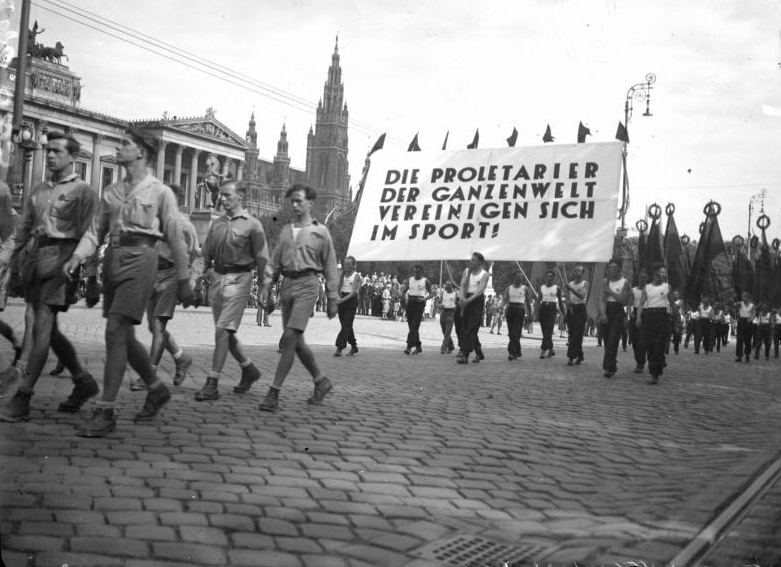 As the Summer Olympics begin in Tokyo, more than 60 percent of people in Japan think that the games should be postponed or cancelled outright. Even with the bleachers empty of spectators, the events are already spreading Covid-19. Working people in Japan are footing the bill of at least $27 billion, and the Japanese government is letting people lose their homes and die in order to get a fleeting geopolitical boost.

Like they do every two years, the Olympic Games highlight the absolute best and the absolute worst of sports. Young people train for years to compete with the best athletes in the entire world. But these pinnacles of physical accomplishment are controlled by a shady clique of capitalists and aristocrats calling themselves the International Olympic Committee (IOC). Cities that host the games spend untold billions and displace people from their homes — only to be left with useless venues that are left to rot. These games are furthermore mired by racism, sexism, and transphobia.

What do socialists say about the Olympics? Proposals for reform are clearly insufficient. However, calling for the games to be abolished would not go down well with the up to four billion people who follow the event. Socialists have long organized sporting competitions for the working class.

Starting with the first Olympic Games in 1896, the IOC has always been an aristocratic institution — its founder was an open white supremacist who opposed women’s participation in sports.

We need a Workers’ Olympics as an alternative to the bourgeois Olympics! This might sound like an empty slogan, but the International Workers’ Olympiads took place from 1921 to 1937. The workers’ movement had always organized its own sports competitions. The Workers’ Olympiads let workers from all over the world exercise and compete together. Participants did not march under national flags — instead, everyone used the same red flag as the universal banner of labor.

These were not small events. The Workers’ Olympiad of 1931 in Vienna attracted 100,000 athletes and a quarter of a million viewers — far more than the 1932 official Olympics in Los Angeles. It also shows an important difference between bourgeois and proletarian sports: the workers’ movement wanted everyone to participate in the games, while the bourgeoisie continues to relegate the masses to passive spectators.

In 1936, the official Olympics were held in Berlin, the capital of Nazi Germany. The Berlin games served as a huge propaganda backdrop for the Nazis, who covered the stadiums in swastika flags, with Lenni Riefenstahl making a propaganda film chock full of fascist imagery. But it was also an opportunity for the Black runner Jesse Owens to smash through the theories about “master races,” which were defended in both Germany and the United States.

A number of countries boycotted the Berlin Olympics. As a replacement, a People’s Olympiad was planned for Barcelona, set to start a week earlier. Athletes from 22 countries arrived, including exiles from Germany and Italy. The games were set to begin on July 19. But two days earlier, right-wing generals initiated a military coup. Workers fought back, and the Spanish Revolution began. The games were cancelled. Many athletes left Spain, but some 200 joined the workers’ militias to fight against the coup.

There are numerous examples of what a Workers’ Olympics could look like. It would let working people from all over the world compete — and require purging the event of the endemic corruption and commercialism. It would mean offering reparations for the racist history of sports competitions under capitalism by encouraging participation of people oppressed by racism and imperialism, especially Black athletes. Such games would need to be organized by workers’ organizations and be open to everyone who wanted to participate. Athletes wouldn’t enter the stadium under national flags, which are supposed to make people identify with their own bourgeoisie. Instead, everyone would join together in a spirit of solidarity.