In the Final Hours of His Term, Trump Pardons Former Aides and Other Capitalist Criminals

Donald Trump issued a list of pardons and commutations in the wee hours of Wednesday morning. It’s mostly a rogue’s gallery of right-wing former aides and capitalist financiers and politicians who have enriched themselves through scams, fraud, and assaults on democracy. 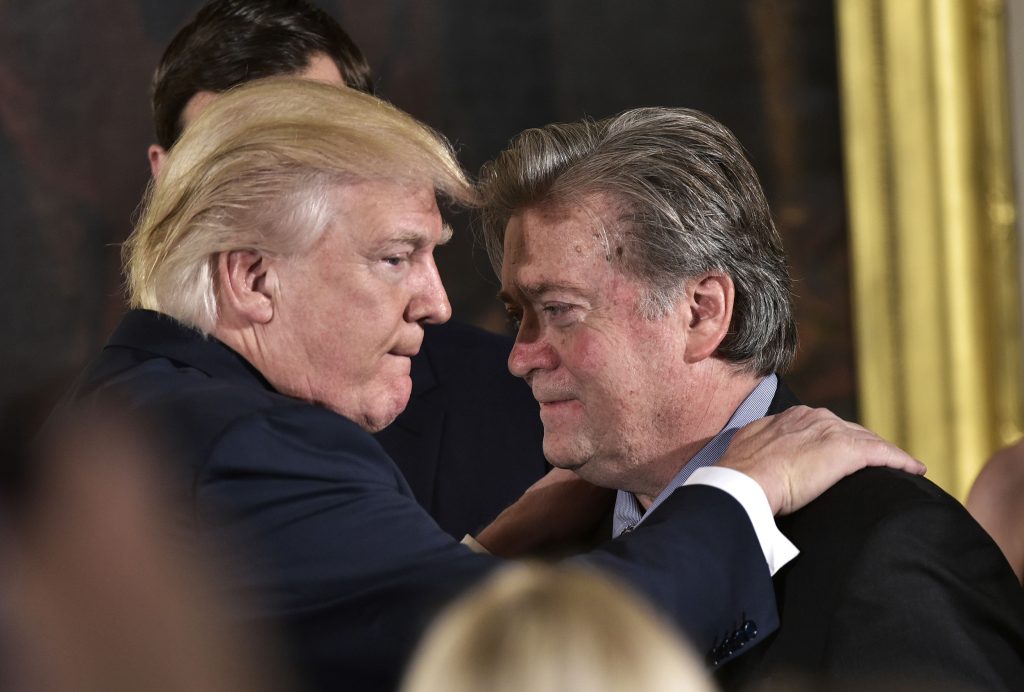 With hours to go in his presidency, Donald Trump early Wednesday morning issued an end-of-term pardon list. Presidents tend to save for their final lists a mix of pardons and sentence commutations that are more controversial, as there is no longer a risk of political blowback. For example, Barack Obama commuted the sentence of Chelsea Manning at the end of his second term. Trump’s final list of 143 names includes some appropriate pardons (such as several people who were in prison for drug offenses) but is also stuffed full of Trump allies facing charges and assorted capitalists imprisoned for what amount to various attacks on the working class. This reveals the deeply undemocratic nature of presidential pardons.

The most notable name on the final pardon list, and only the tip of the iceberg, is former Trump confidant (and prominent member of the far right) Steve Bannon. Following his work as chief strategist in the Trump White House, Bannon was indicted on several counts of fraud after he raised money — from Trump’s own base — for a fraudulent “We Build the Wall” campaign. These funds, raised through GoFundMe and other means, were supposed to go to help build the wall on  the U.S.-Mexico border. But Bannon and his co-conspirators were arrested for pocketing the money. Bannon allegedly received at least $1 million for his part in the scam. Now Trump has issued him a full pardon ahead of his trial.

Trump also pardoned Elliott Broidy, the former finance chair of the Republican National Committee and an important Trump fundraiser. Broidy was in prison following his conviction for lobbying the Justice Department to drop an investigation into a multi-billion-dollar scam through which the prime minister of Malaysia stole billions from a state investment fund. Trial documents revealed that Broidy and his wife stood to earn $75 million if Broidy successfully convinced the Justice Department to drop its investigation, on top of the $6 million he’d already been paid for his services.

The sheer number of financial crimes by Trump’s pardon recipients is staggering. Michael Ashley was pardoned: he’s a banker convicted of fraud and ordered to pay $49 million in restitution after he diverted mortgage-holders’ payments to himself and his family members, which led to the 2009 collapse of his mortgage company and foreclosure for many homeowners. There’s David Tamman, who was found guilty of participating in a $22-million Ponzi scheme in California that specifically targeted Iranian-Americans. Fred Davis Clark Jr., the operator of a $300-million Ponzi scheme in Florida, got a pardon; his victims lost retirement funds and life savings.

Former elected officials figure prominently on Trump’s list; they all took advantage of their positions of power to enrich themselves at the expense of working people. This rogue’s gallery includes Randall “Duke” Cunningham, the Republican member of Congress from California’s 50th district until 2005, when he went to prison for accepting more than $2 million in bribes from defense contractors; Robert Cannon Hayes, the former congressman from North Carolina’s 8th district, and former chair of the state’s Republican Party, who pleaded guilty to lying to the FBI when accused of taking part in a bribery scheme; and Kwame Kilpatrick, the former Democratic mayor of Detroit who pleaded guilty to obstruction of justice during yet another bribery scandal. There’s even a current elected official, Casey Urlacher, the Republican mayor of Mettawa, Illinois, and failed candidate for his party’s nomination for an Illinois State Senate seat, who was indicted on conspiracy and other charges related to an illegal gambling ring.

It is also possible that the pardons that we currently know about are not the end of the story. There is no formal rule that says that the president needs to announce their pardons or even necessarily file them in any official way. In other words, it is possible that Trump issued pardons to members of his family via secret letter for them to reveal as an almost “get out of jail free” card if they are brought up on charges. Trump may even have issued such a pardon to himself, though most believe that a “self-pardon” wouldn’t stand up in court.

We should be clear: these pardons are not only examples of Trump’s personal corruption. They reveal how the capitalist state protects itself. Of course, it is a great thing that drug “offenders” who have lost decades of their lives to the racist criminal “justice” system are able to walk free again, but we shouldn’t confuse those pardons with the real purpose of this presidential power. Trump has used his pardon power exactly as it was meant to function.

The presidential pardon was introduced into the Constitution explicitly to “restore the tranquillity of the commonwealth,” in the words of Alexander Hamilton, by allowing for pardons to those who rebelled against the state. This has almost always meant those who challenge the state from within the ruling class. For example, it was used by Andrew Johnson to issue a blanket pardon to all those who fought for the Confederacy except its top leaders, most of whom received personal pardons. Presidents using their pardon power to bail out allies and other politicians is hardly new; famously, Gerald Ford pardoned Richard Nixon, the man who appointed him vice president.

The power of the pardon gives the leader of the capitalist state the sole ability to overturn and commute sentences at will. It is a total slap in the face to all ideas of democracy or justice. The very idea that Trump, by pardoning Bannon and others, somehow “subverted” the true idea of the pardon is nonsense.

In his final hours as president, Trump continued what he spent his entire term in office doing: unintentionally pulling back the curtain on the undemocratic mechanisms of the U.S. bourgeois regime and revealing how its politicians ensure its protection. So now, millionaires who enriched themselves by scamming the working class will walk free while countless Black and Brown people remain forced to waste their lives away in prison cells. This is America’s so-called “democracy”: one man (who lost his re-election!) gets to decide, unilaterally, who gets “freedom” and who must rot in jail.