Protesters in Minneapolis are criminalized and attacked with tear gas and rubber bullets. Meanwhile, murderous cop, Derek Chauvin, is safely at home with dozens of riot police protecting him. Six protesters were arrested and taken to jail for standing around in front of his house. 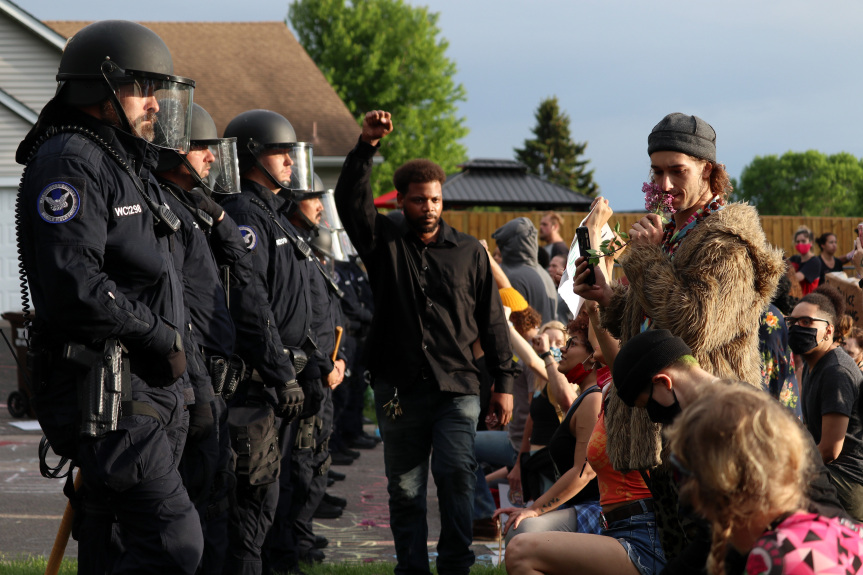 The crowd begged the cops to stop. While suffocating Floyd, one of the officers told bystanders, “This is why you don’t do drugs, kids.” A bystander responded, “This isn’t about drugs, bro. He’s human.”

You May Be Interested In: Stand Up, Fight Back: Call for Submissions on Police Violence and Black Struggle

The video has gone viral and millions of people around the country have seen it. There have been two days of mobilizations in Minneapolis, as well as one in solidarity in Los Angeles. The police tear-gassed protesters and shot rubber bullets at people for simply saying that Black Lives Matter, and that killer cops should be jailed. Some protesters demonstrated at the home of the killer cop, Derek Chauvin, writing “murderer” in the driveway. One person posted on Facebook that delivery workers were refusing to deliver once they found out who lived in the house.

Derek Chauvin and the three other cops who collaborated in the murder are sitting safely and comfortably at home with their families. Yes, they’ve been fired, but so have millions of other people for offenses as small as arriving late to work, or due to the coronavirus. Instead, the protesters have been criminalized.

And worse still: dozens of riot police are standing guard to protect Derek Chauvin’s house. Dozens of riot police members are currently defending the home of this murderer, ready to beat, tear gas, and even arrest anyone who confronts them.  Yesterday, six people were arrested for “unlawful assembly and obstruction of legal process .” They were taken to the Washington County Jail. In other words, peaceful protesters were arrested for standing around in front of Chauvin’s house while Chauvin has not been arrested for murdering a Black man.

You’ve gotta see this. ⁣
⁣
Look how many police are guarding the home of their FORMER colleague who lynched a man in broad daylight. ⁣
⁣
Not 2, not 5, not 25, but 75 police officers came to his house to guard him. ⁣
⁣
Video from Chloe Jo.

There is perhaps no better example of the role of the (in)justice system: defending murderous cops from people who simply demand the right for Black people to live.