May 1: For an International of Socialist Revolution

On May 1, the Trotskyist Fraction — Fourth International held an online rally to present a new manifesto. Comrades from 14 countries in Europe and the Americas took part. You can watch the video here.

The online rally presented the manifesto The Capitalist Disaster and the Struggle for an International of Socialist Revolution. That manifesto was published two weeks ago by the groups that make up the Trotskyist Fraction — Fourth International and publish the online newspapers of the Left Voice / La Izquierda Diario network.

As the manifesto says:

The purpose of this manifesto, released by the Trotskyist Fraction — Fourth International, is to resume the debate on the need for a movement for a revolutionary socialist international. It is aimed at the youth, the working class, and the oppressed who are beginning to mobilize and who have been at the forefront of the wave of mass rebellions and general strikes around the world. […] Our aim is to recover a revolutionary, internationalist, and socialist perspective in order to destroy a system that deserves to perish. This manifesto is also intended for organizations and individuals of the Trotskyist movement and internationalist organizations that agree on the importance of moving forward in the debate on the proposal of a movement for a Revolutionary Socialist International, based on the lessons learned from class struggle. 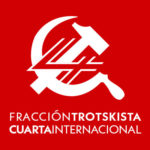