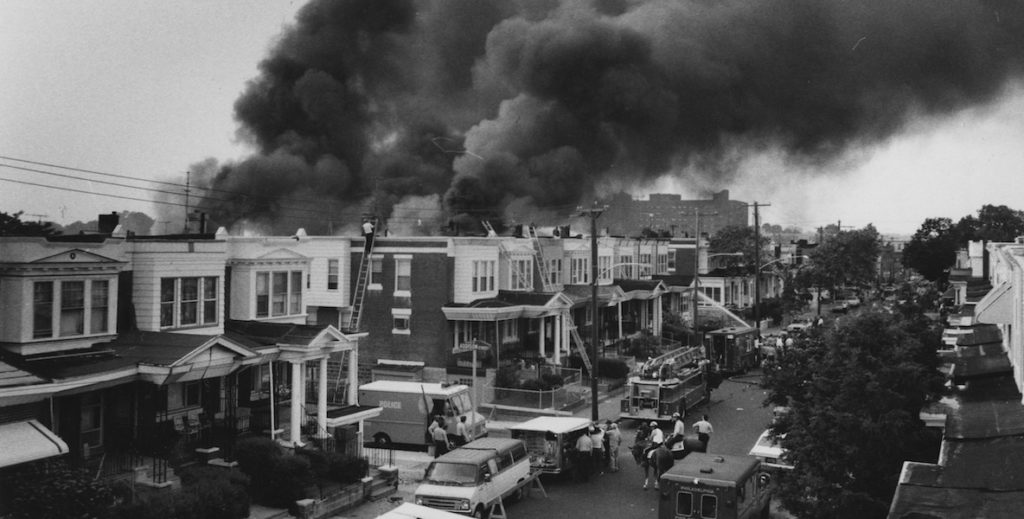 It only took 35 years, but the Democratic city government of Philadelphia has finally said “sorry” for the brutal, deadly attack on MOVE.

The pathetic apology comes with a promise to dedicate the anniversary of the attack as “an annual day of observation, reflection and recommitment.” It’s a publicity stunt — a way to scrub  the Democratic city government’s image in response to the new documentary about MOVE on HBO, 40 Years a Prisoner.

On May 13, 1985, Philadelphia police mounted a mass offensive against the Black, radical, and anti-capitalist organization, MOVE. That morning, the Philadelphia Police Department gathered in force to raid the house, attack and arrest the thirteen MOVE members living there. The police fired more than ten thousand rounds in the firefight that followed.

And then the cops dropped two one-pound explosives — created in DuPont company labs — onto the MOVE house from a helicopter. The explosion and fire killed eleven MOVE members.  Five of them were kids between the ages 7 and 13.

The fire engulfed 65 homes as it tore through West Philadelphia. Firefighters were told to let the fire burn — a message from the police commissioner to the Black radical struggle in Philadelphia.

“If City Officials are sincere about rectifying the debacle of 1985, they would release our brother, Mumia Abu Jamal immediately! They can’t give us back our 11 family members they murdered in 1985, but they can give us back our brother, Mumia Abu Jamal, who has been in prison 39 years for a crime he didn’t commit and everybody knows this […] MOVE is saying that if Philadelphia officials think offering an apology is the answer, they should be offering apologies to the families of Walter Wallace, Winston Hood, William Green, and the families of countless other victims of police brutality and murder in the city of so call ‘Brotherly Love.’ We’re saying an apology without action is meaningless. RELEASE MUMIA ABU JAMAL! LONG LIVE JOHN AFRICA [founder of MOVE]!”

As MOVE points out, the apology is an obscenely cynical play by the Democratic city government. And the apology showcases a crucial lesson: Philadelphia is a Democratic Party-controlled city. And yet it was — and still is — the representative of the white supremacist ruling class of capitalism.

While Abu Jamal sits in prison, Wilson Goode — the mayor who green-lit the bombing, refused to order the fire put out, and later lied about his role in the massacre — gives speeches at local churches and is heaped with honors by Philly Democrats. Russel Maroon Shoatz, a former Black Panther, is also still in prison. When Ant Smith, a prominent anti-police activist in Philly, was targeted by the federal government for arrest as payback for the massive anti-cop uprising in Philly this past summer, City Council had nothing to say.

Neither did the “progressive” DA Larry Krasner, darling of the local DSA leadership. Krasner has also been totally silent about the cops who murdered Walter Wallace, Jr. and who still walk free. In fact, Krasner scolded the the people protesting Wallace’s murder for being “violent,” and he’s leading the prosecution of activists from the summer anti-cop protests.

The last 35 years teach us that the Democrats won’t be reformed into a better party. Local elections won’t fix this problem. Only a revolutionary struggle against the Philly Democrats, against their police force, and against the ruling rich can win real change.

Justice for MOVE! Justice for Walter Wallace, Jr. and all the many people murdered by the cops! Free Mumia! Jail all killer cops!