Neera Tanden Is Biden’s Latest Middle Finger to the Left

Joe Biden has picked Neera Tanden, a fierce critic of Bernie Sanders and the progressive wing of the Democratic Party, to head the Office of Management and Budget. The move is just the latest sign that Biden will govern from the center-right, offering nothing to the Left. 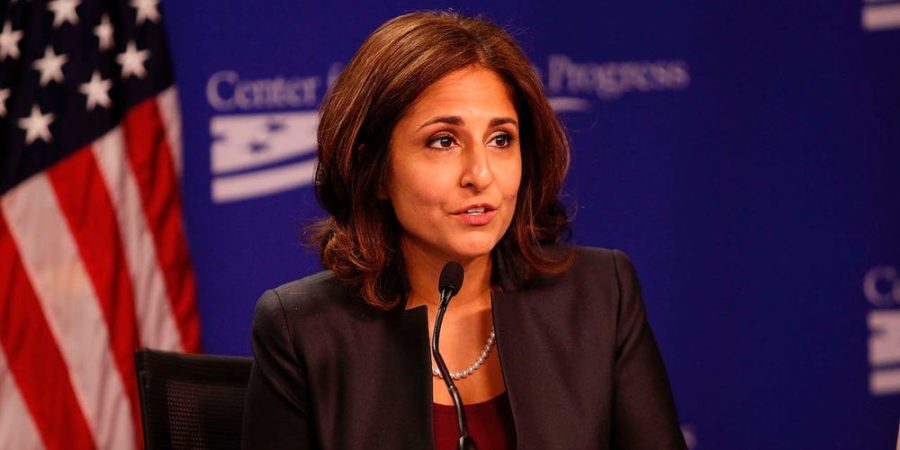 Joe Biden, as part of his roll-out of the coming administration, has named Neera Tanden to be his nominee to head the Office of Management and Budget (OMB). Tanden’s nomination has provoked outrage from members of the progressive wing of the Democratic Party both because of her long history of right-wing stances as well as her long-standing animosity toward Bernie Sanders and his supporters. This is just the latest sign that Biden is setting himself up to govern from the center-right and that he was able to successfully con the progressive wing of his party into supporting him despite offering them nothing in return.

Tanden is a life-long politico whose career has been closely tied with the Clintons. She worked in Bill Clinton’s White House, in Hillary Clinton’s senate office, and on both of her presidential campaigns. More recently Tanden has been serving as the CEO of the Center for American Progress (CAP), a Democratic think tank that worked closely with the Obama administration.

CAP claims to be a progressive organization but even a cursory glance shows this to be false. CAP is, in fact, deeply in the pocket of capitalists. One of the clearest examples of this came earlier this year when the New York Times broke the story that CAP suppressed a report about NYPD surveillance of Muslims because the report was critical of Michael Bloomberg, who donated  millions of dollars to the organization. This occurred in 2015 while Tanden was the CEO.

CAP has also been criticized for hosting an event with Benjamin Netanyahu, supporting Saudi Arabia, and a lack of transparency about where their funding was coming from.  While many of their donors remain anonymous, corporations suchs as Wells Fargo, Walmart, Northrop Grumman, Goldman Sachs, Pharmaceutical Research and Manufacturers of America,  and health insurance advocacy group America’s Health Insurance Plans (AHIP) have all donated in the past. In addition, CAP has received money from billionaires like George Soros and Bill Gates, as well as the United Arab Emirates and the Ford Foundation.

This laundry list of capitalists and corporations who have been funding Tanden’s political home gives lie to any claim that she has about being anything other than a corporate shill. As an example of this, she helped pass Obamacare and then turned around and accepted donations from AHIP, who spent $100 million to try and defeat it.

The OMB is responsible for creating and implementing the president’s budget and it oversees all federal agencies to ensure that their policies are in-line with the president’s policy agenda. As the head of the OMB, Tanden will continue to be a servant of capital and an enemy of the working class. Indeed, as the head of CAP she supported cuts to “entitlement” programs like Social Security and Medicare so it seems likely that those programs could come under attack from a Tanden led OMB.

Tanden is especially controversial among the Sanders camp. Tanden is a sworn enemy of the progressive wing of the party and used CAP and its associated website ThinkProgress to attack Sanders during the primaries. This escalated to the point that Sanders put out a statement denouncing Tanden by name for “maligning [his] staff and supporters and belittling progressive ideas.” She has been very vocal on Twitter and in media appearances in denouncing the left, though she has recently deleted many of her old anti-Sanders tweets, ostensibly in the name of party unity.

The New Republic, writing about leaked emails from Tanden that came out in the Clinton campaign hacks of 2016, described her as

“an operator who, in spite of her professed deference to “serious ideas,” has actively blurred the lines between policy and politics, all to advance a single goal: electing Hillary Clinton… In pursuit of that goal, she has consistently prioritized politics over policy, and frozen out dissenters who might otherwise have ideas of value to contribute to the Democratic agenda.”

The leaked emails, as TNR points out, reveal Tanden as an almost cartoonish version of an establishment political animal. She looks at every issue as a mechanism to either gain or consolidate power and influence. Outside of defending the establishment at all costs, she seems willing to take any position that benefits her. Her own words dovetail exactly with the sort of person who would both be the “architect of the Affordable Care Act” and take money from its fiercest opponents. It is no wonder then that she is now set to become a member of the Biden administration, another establishment politician whose only political objective is to protect the status quo.

What Tanden’s nomination shows more than anything is that Biden is an enemy of the working class and the Left. This is not news but it should be highlighted because we should not so quickly forget that a large section of  the Left called for support for Biden as the “lesser evil.” In many ways, Biden owes his victory to the ground game and popularity of the Progressive wing of the Democratic Party who were able to hold Biden’s coalition together. No one was more influential in this process than Tanden’s favorite targets, Bernie Sanders and the Squad. But, now that Biden has won, he is not only offering the progressives nothing in return but also appointing people to key positions who are actively antagonistic towards progressive ideas.

In addition, while the reformist Left such as the DSA and Jacobin Magazine may be up in arms about Tanden now, let us not forget that just a few weeks ago they were remaining very quiet on the question of the election and calling for support for Democrats in local races. The concept of “pushing Biden to the left,” was trotted out by certain DSA members as if that strategy hadn’t been tried and failed with every Democratic candidate of the best 50 years. Several important socialist leaders and academics actively whipped votes for Biden and now protest that he’s setting up an austerity government. But, when the next election rolls around, all of these sharp denunciations will go out the window and, once again, the reformist Left will tell us to bite the bullet and vote for whatever neoliberal Democrat is on the ballot. “Vote now, protest later” will, once again, be the slogan. But we can’t fall for it again. We can’t be Charlie Brown with the football for another two, four, six, eight years.

Joe Biden nominated Neera Tanden to head the OMB because that’s what Democrats do. They position themselves as the lesser evil during elections and then, as soon as the elections are over, they viciously attack the working class and oppressed. It’s what Obama did, it’s what Clinton did, and it’s what Biden is doing. And it will be what the next Democrat does too.

By this same notion, we must also keep in mind that the issue with Tanden’s nomination isn’t just that she’s the wrong person to run the OMB but that her nomination shows the true nature of the OMB. In other words, there is no right person to run the OMB because the entire purpose of the OMB is to implement capitalist budgets which will, by their very nature, attack and exploit the working class.

As the head of the OMB, Tanden will certainly be a pro-capitalist figure, but even if Bernie Sanders or any other member of the progressive wing of the Democratic Party was named to that position, they would still be serving the interests of capital, just in a different way. Protecting capitalism is central to the nature of that position and the nature of Biden’s government. Biden’s budgets will never challenge capitalism because Biden was elected to restore stability to American capitalism. He got more billionaire donors than Trump, had greater support from sectors of big capital, and told his corporate donors that “nothing would fundamentally change.” Now, as President-Elect, he is showing that statement to be true. We cannot delude ourselves into thinking that a Biden administration could ever produce a pro-working class budget.

The strategy of pushing the Democratic Party to the left has completely failed and the establishment wing continues to have control. Tanden may be one of the first enemies of the left to be announced but she certainly will not be the last. Biden is filling his administration with right-wingers who will block any progressive reform and implement brutal austerity without batting an eyelid. This is what the Democrats do and we can’t continue to have any illusions about that.