Philly Cops Murdered Walter Wallace Jr. Where Do We Go from Here?

The Philadelphia Police thugs murdered another Black man, Walter Wallace, Jr. on October 26. To build the power we need to fight back against police terror, we need to organize on the streets and at our workplaces. 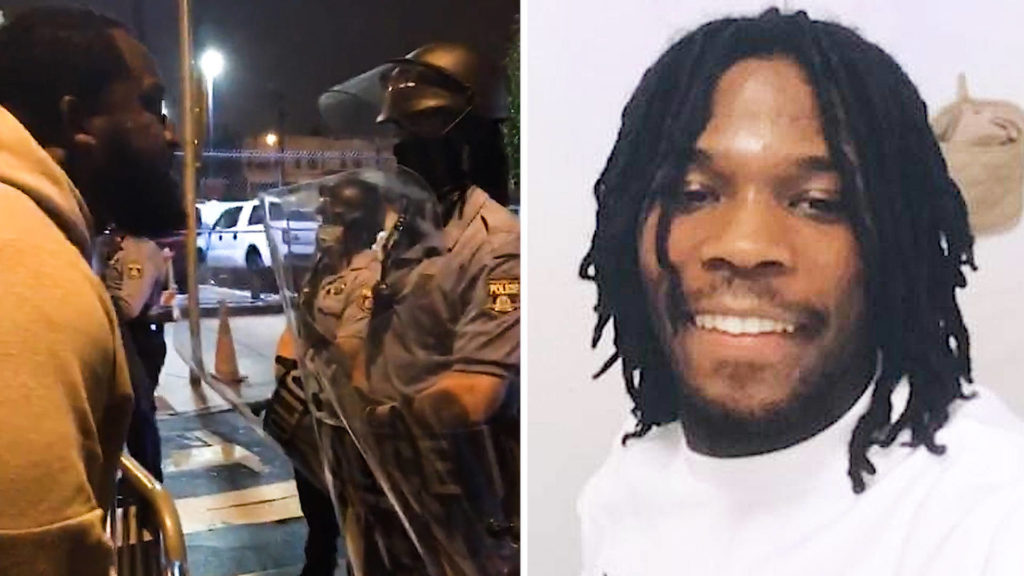 Cops murdered Walter Wallace, Jr. yesterday afternoon in West Philadelphia. Wallace was 27 years old. According to his father, he struggled with mental health issues, and reports say he was “in distress” when police arrived at the scene.

The police killed him in front of his mother and neighbors. A cell phone captured the police slaying on video: several cops circle Wallace; they open fire without any warning — killing him with at least ten shots.

The pigs are justifying their actions by alleging that Wallace had a knife, but it is absurd to think the cops were in any real danger. The video from that night shows clearly that the cops stood a dozen or more feet away from Wallace the entire time, stalking him as he walked.

That night, hundreds from around Philadelphia gathered in protest at Malcolm X Park in West Philly, then marched through neighborhoods to the police station at 55th and Pine. The cops responded in force. Clad in riot gear, they attacked protesters with shields and batons. Protesters, who had been pelting the cops with trash, at one point forced a panicked retreat by the police down a West Philly street. A cop car was set on fire. According to one report, a construction vehicle was commandeered.

Philly’s Democratic mayor, Jim Kenney — who ran for office on the promise to crack down on racist policing — acts confused. He has nothing to say other than noting that he has many “difficult questions that must be answered.” The so-called progressive Democratic DA and darling of the DSA, Larry Krasner said nothing about racist policing after the murder, opting instead for a bland promise to investigate and scolding protesters themselves for “violence.”

Most importantly: Walter Wallace, Jr.’s killers walk free. They have not been charged, arrested, or fired. And yet dozens of activists — protesting the murder — have been arrested.

The city government’s lack of response is no surprise. This summer, Kenney presided over the brutal crackdown on the democratic right to protest against the racist Philly Police Department (PPD). He called in the National Guard which, along with the PPD, mercilessly fired teargas canisters at trapped protesters. Krasner, for his part, is leading the charge to prosecute many protesters from the summer uprising.

The killer cops need to be jailed, and the racist police system has to be completely destroyed.  What’s next if we want to build the class power we’ll need to win against the racist police?

Philly and the Racist Policing of Capitalism

Philadelphia is a clear example of the structural racism at the heart of capitalism.

Philly is one of the most racially segregated cities in America. In the Philly area, Black unemployment is around 15%, far higher than white unemployment (about 9%). This disparity is among the worst in the country. About one in four people in Philly live in poverty; for Black people, though, the poverty-rate is 38%. And in Philly, the COVID-19 pandemic is hitting Black communities most brutally. Black people are far more likely to contract the virus and to die from it.

Cops have long been the front line force for the city’s Democratic government, existing above all to maintain capitalist “order” by spreading terror in Black working-class neighborhoods.

In all this, the Philly police “union” protects its violent and racist cops with near impunity. When cops are fired or put on leave, they are routinely reinstated. When the Department of Justice criticized the PPD for how much it was shooting and killing people, the cop “union” rejected any independent oversight of police shootings. Instead, the violent, racist, and deadly PPD will now just monitor itself. Now the union is singing the praises of Wallace’s murderers.

Where to next? Assemblies of workers and activists

Philly was home to some of the largest and most militant Black LIves Matter mobilizations this past summer. Thousands took to the street day after day. On June 6th alone, 66,000 people mobilized across the city. They knocked the cops back on their heels with the sheer number of people mobilizing against them.

The goal is the end of the racist police system entirely, but despite the massive struggle in Philly, the PPD maintains its budget of $4.9 billion — in a city whose leaders constantly say there isn’t enough money for education. But there have been some important victories. The mobilizations this summer resulted in the elimination of a $19 million budget increase to the police budget. And two protest encampments of unhoused people and a major takeover of abandoned houses by activists, which emerged during the uprising, won major concessions from the city, including more public housing, placed under community control.

But building up our power means above all building our ability to work collectively, across working-class struggles in Philly — a city whose Left and progressive scene is too often deeply fractured. And this crucially means building up the role and power of organized labor to the fight to jail killer cops and defund and abolish the police system.

Union numbers might be low across the country, but in Philly unions occupy some of the major strategic choke points of the local economy. Public transportation workers, crucial to get people back and forth to work in the struggling economy, are organized in the MTA. Philly public school teachers (slated to return to the classroom in November, and key for the care of the children of workers) are organized in the PFT. More than this, workers have been driving a wave of unionizing in this city in recent years.

To beat back the power of the cops, we will need to add the strength of workers in our workplaces, especially the strength of unionized labor: militant actions for the movement’s demands at the workplace — strikes, walkouts, slow-downs, and beyond.

But intensifying the anti-cop movement with labor actions means fighting against the union bureaucrats. The leaders of the Philly unions sat on their hands during the historic uprising against the cops all summer. They offered little more than bland, vague support — or silence.

To mobilize in our unions, then, means mobilizing the most radical activist wings of the rank and file members themselves, beneath and beyond the bureaucrats. For example, assemblies would be a key way to combine activists inside unions (like the WE Caucus of rank and filers in the PFT) with activists mobilizing against cops in the streets.

Those kinds of assemblies will be crucial to building more lasting and more effective power against the cops. We need our own spaces to discuss how to “scale up.” Assemblies can increase the reach of calls to mobilize, and make it possible to coordinate larger-scale actions that can both disrupt the flow of life through streets and the flow of money through our workplaces.

Another major piece of the puzzle is the fight to kick cops out of our unions altogether. It’s clear from everything that’s been said that cop “unions” are a key to police power and the impunity with which they murder BIPOC. Inside our unions, we badly need to organize to force our local union bureaucrats to take a real and committed stand against racism. Those bureaucrats need to announce that cops are not workers — they’re just thugs for the ruling class.  And they need to demand that our union nationals and federations (like SEIU and the AFL-CIO, which represent and protect cops) kick cops out. Getting cops out of unions will mean weakening their power and their impunity in fundamental ways. AFSCME and SEIU rank and filers are showing the way.

Finally, throwing our unions into the fight against cops  requires cutting all union ties to the Democratic Party. For too long Philly unions have been lapdogs to Kenney and the Democrats generally — even after the brutality of the Democratic city’s police towards BIPOC and the sheer violence against anti-cop protests. We’ve already seen that neither Kenney nor Krasner will save us. Whatever their campaign promises, they’re working for the ruling class and will never dismantle the racist police system.

Only the coordinated power of the working class and oppressed — in the streets, at work, and in our unions — can win against the racist police system that murdered Walter Wallace, Jr.

Cops Out of Our Unions