Philly Housing Activists Are Fighting Evictions in the Streets

The eviction housing crisis is hitting home in Philadelphia, with the local Democrats protecting the landlords at the expense of renters and shutting down emergency measures for the unhoused. But Philly is home to a powerful housing movement that is fighting back. 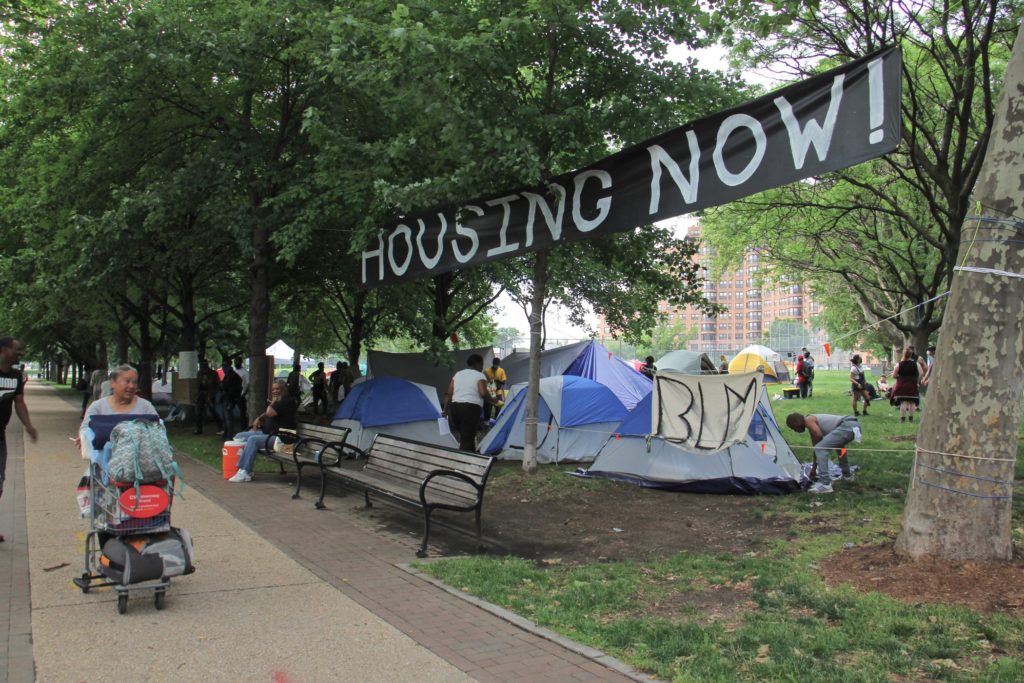 Philadelphia is facing a housing crisis with little help from the Democratic city council, mayor, or governor. In the city, 5,700 people are currently unhoused. Almost a thousand sleep on the streets on a given night. But more than that, this year has already seen 4,400 evictions filed in Philly courts. Another 2,000 renters are facing the very real threat of eviction and becoming part of the unhoused. This multifaceted crisis of housing is taking place as the numbers of those infected with Covid-19 are skyrocketing in the city (reaching 100,000 cases and 2,500 deaths), as winter descends, and in the wake of a major snowstorm that just hit the city.

The Democratic City Council refused to advance a bill that would protect Philly renters. Instead, it’s falling over itself to cater to landlords. That bill was opposed by the Philadelphia Apartment Association (PAA), an organization to champion the cause of landlords demanding their money from renters and lobbying for much stricter rules about which evictions can be delayed as a result of the pandemic. Collecting rent matters more than protecting the lives of renters.

What’s more, the city right now is in the process of evicting the unhoused from the “Covid hotels” — emergency housing that was set up to protect the unhoused from infection and death. That housing option expired December 15th. Rather than extend it, the city government mandated that people be moved, such as into crowded shelters with little or no protections against infection. These “relocations” use police vans, and the unhoused are often given no information about where they’re being taken.

Meanwhile, the city has made absolutely certain to maintain the massive $727 million budget for a police force that attacks and murders Black Philadelphians with impunity. The police budget far outstrips next year’s $669 million budget for the Department of Public Health. In fact, Democrats sat and watched while Hahnemann, one of the city’s major hospitals that provided care for poorer Philadelphians, shut its doors permanently because it wasn’t profitable enough — during one of the deadliest health crises in city history.

The situation in Philly and beyond is poised to get much worse. The new stimulus bill that the Democrats and Republicans are wrangling over provides no new funds for local governments. The national moratorium on evictions — which has slowed the eviction crisis so far — ends on January 1.

Nevertheless, Philly has been home to a powerful and growing housing movement.

This summer, in the midst of a massive citywide uprising against the police, unhoused activists and their allies took over a section of grassy field just off of the Benjamin Franklin Parkway in center city Philadelphia. The encampment became known as Camp JTD, after James Talib Dean — one of its founders who died during the first week of the occupation. The movement quickly spread to the north and west, where organizers created another encampment — Camp Teddy — in a vacant lot outside the multimillion-dollar headquarters of the Philadelphia Housing Authority (PHA).

The coalition spearheading the occupations — Philadelphia Housing Action, which includes #OccupyPHA, Workers Revolutionary Collective, and the Black and Brown Workers Cooperative — leveled a series of demands at the Democratic mayor and government. These included defunding and disbanding the Philly police, transferring the Philadelphia Housing Authority and the Philadelphia Redevelopment Authority to popular control, and declaring the encampments no-cop zones (such as the CHAZ in Seattle).

The city’s Democratic government fought to shut down the struggle for housing in the name of its “concern” for the health and safety of the occupiers — despite the fact that it has done little during a years-long housing crisis that has left nearly 6,000 people unhoused on any given night, and despite its repeated attacks and evictions on encampments of the unhoused for years. This pretend concern for safety is even more ridiculous given that the Philadelphia Housing Authority just finished its lavish $45 million headquarters.

In fact, the PHA works as a tool for gentrification, selling off thousands of its city-owned properties for next to nothing. All the while, more than a thousand empty houses sit idle. As Jennifer Bennetch, a founder of #OccupyPHA, puts it: “They are operating more like a private developer selling properties and trying to build commercial real estate. They want to do everything but their job, which is to house people.”

Again and again, the city tried to evict the camps, massing legions of cops several times to do so — only to be driven back time and again. The city’s goal was obvious: to clear away a “blot” on the fashionable and rapidly gentrifying Art Museum area, and sweep away attacks on the Democratic City’s support for gentrification and police violence. But organizers’ calls for support brought hundreds of defenders at all hours, taking shifts to keep watch against a police raid for days in a row. Occupiers erected barricades as the encampments swelled at times to 300 residents across both locations and as they leveled a lawsuit at the city to stop the eviction.

But the city Democrats tried other means, too — calling in a non-profit “anti-homeless” group, the Homelessness Advocacy Project (or HAP), to broker a deal. Not long afterwards, the Philadelphia Inquirer ran a leaked story about HAP’s disdain for the encampments, with one HAP employee blasting the struggle for housing as “irresponsible.” Organizers then refused to work with the non-profit shill for the city government.

But the struggle for housing stretched well beyond the encampments. Dozens of people — primarily unhoused mothers and their children — took over vacant houses, transforming them into livable homes and fighting off the city’s attempts to remove them. The takeover was the largest of its kind in the United States in recent memory.

Ultimately the city backed down — a sign not only of the power and organization of the encampments, but also of the Philly ruling elite’s fear of the power of class struggle in the city, after tens of thousands of people filled the streets and burned cop cars over the summer during the uprising against the police. In the face of the revolt, the mayor agreed to allow the squatters to remain in the 15 homes they had taken over, and to place 50 houses into a community land trust under community control. The city promised to expand its support for the unhoused in a number of other ways as well.

These victories, while important, still carry new dangers. The land trust is a key concession, but it could serve as a tool to co-opt or defang a powerful housing movement in the city, And that power will have to be maintained and grow to keep the city at its word and face the challenges ahead.

This movement for housing for the working class and oppressed has now extended into the fight to defend the unhoused against their eviction from the “Covid hotels.” Activists have been protesting the evictions of the unhoused for days, blocking the police vans and offering mutual aid in the form of food and other supplies — as the unhoused face the onset of winter that brought with it the recent snowstorm and freezing temperatures.

The struggle during the summer offers key lessons as the eviction crisis ramps up in Philly. First and foremost, the wins this summer show that the power to fight the landlords and city does not come from progressive elected officials. Many celebrated politicians, such as Kendra Brooks and Jamie Gauthier from the city council and Nikil Saval and Rick Krajewski from the state legislature, voiced support for the camps, with some of them visiting from time to time. And yet the power that drove the movement didn’t come from them. It started with and flowed from independent, active organizing of the working class and oppressed against the city’s Democratic government, and was given more force because it came on the heels of a massive summer uprising against the police led by Black youth, which showed the power of the working class and oppressed.

In fact, while Brooks and Gauthier were calling for a general negotiation and resolution with the city, it was the organizers who had the good sense to reject the “help” of the Democrat-aligned Homelessness Advocacy Project that was deeply hostile to their work and would have likely served to co-opt and badly weaken the movement.

But a more intense eviction crisis is looming, and has already been making itself felt in the thousands of evictions so far this year. In this situation, organized labor will be crucial to success. For example, Philadelphia’s public school teachers, represented by the Philadelphia Federation of Teachers (PFT), will likely be teaching many students who have been or will face the threat of eviction. The PFT’s left wing, the Caucus of Working Educators, is a natural ally in the housing fight and a toehold inside the union. More than that, the PFT will be renegotiating a contract in 2021. Once the old contract runs out, its “no strike” clause will be inoperative — which could make organizing for militant workplace actions a lower bar to reach.

Public transit workers of the Southeast Pennsylvania Transportation Authority (SEPTA) will also be negotiating a new contract in 2021. Transport Workers Union 234 isn’t known for its radical actions, but we saw over the summer the crucial role that public transportation unions can play in the struggle of the working class and oppressed. Drivers in Minneapolis, Pittsburgh, New York, and elsewhere stood in solidarity with the uprising against the cops, refusing to transport arrested protesters on their buses. And so targeting agitation at bus drivers could be an important tactic.

Philly’s housing movement has shown itself to be a powerful force over the summer. Bigger challenges lie ahead, and with them a chance to increase the class struggle to meet them.