The struggle to win justice for Walter Wallace, Jr. — murdered by the police — has been steadily growing in Philadelphia. The cops brutally attacked protesters last night and the Democratic mayor is now calling in the National Guard and implementing curfew. 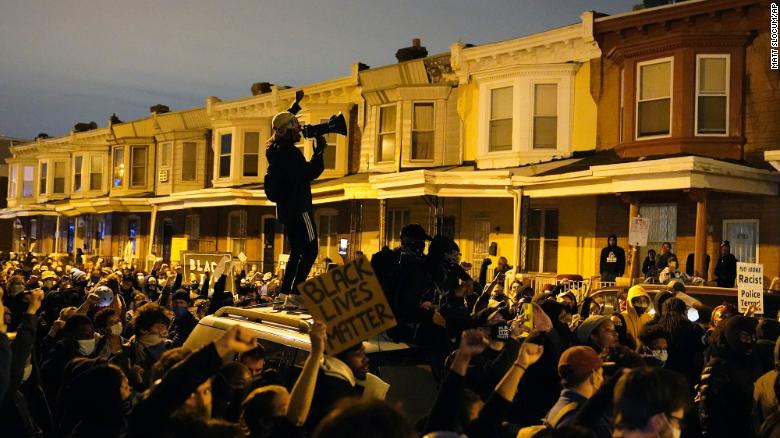 For the second night in a row, Philadelphia has been rocked by protests against the police murder of Walter Wallace, Jr.

You might be interested in: Philly Cops Murdered Walter Wallace Jr.: Where do We Go From Here?

Wallace was murdered by police on the afternoon of October 26th while in distress. His mother called for an ambulance. Instead, the police showed up and murdered him in front of his mother and neighbors. No charges were brought against the killer cops and no one has been fired.

That night, protesters gathered in West Philadelphia at the 18th police precinct building at 55th and Pine police, demanding justice for Wallace. Instead, police attacked them brutally and arrested over 100 people.

Last night the struggle grew. An even bigger crowd — upwards of 1,000 people, including a range of Philly’s left progressive organizations, stretching down Pine Street — of the working class and oppressed across Philadelphia gathered at the 18th precinct once more, marching there from a rally at Malcolm X Park.

Protesters stood toe to toe with militarized police, screaming across the barricades the cops had erected to protect their precinct. Then, the majority of the crowd began to march back to Malcolm X park, clashing with police who brutally attacked them at 52nd and Pine with their batons and shields — who unleashed so much brutality that they were literally dripping in the blood of protesters.

The Democratic mayor, Jim Kenney and his PPD are fixated on repressing this uprising against the white supremacist Philadelphia police. Amid the carnage on Tuesday night, activists were rounded up and scores were arrested. In addition, the Democratic governor Tom Wolf has called in the National Guard — the same Guard that, earlier in the Black Lives Matter movement, trapped protesters on I-676 and then, with the PPD, mercilessly tear-gassed them. The city is also slated to announce a curfew tonight, starting from 9 p.m. The National Guard will take to the streets of Philadelphia on Wednesday or Thursday to implement this curfew and restore what the ruling class considers “order”: the ability of state-sponsored thugs to murder Black people with impunity.

The Democratic city government refused and still refuses to release the killer cops’ names or the body cam footage. No one was arrested or charged. No one was fired. Wallace’s killers walk free. Democratic mayor Jim Kenney offers nothing more than asking the white supremacist Philly police to investigate the shooting themselves, using their own “Officer Involved Shooting Investigation Unit.” The Democratic DA and darling of the DSA and reformist left, Larry Krasner, chose to scold the protesters themselves for their so-called “violence.”

Joe Biden has weighed in too. The man who helped build the system of racist mass incarceration in the U.S. — and who asks politely for cops to shoot Black people “in the leg” rather than the heart — spends the vast majority of his statement attacking protesters for fighting back. No local or national Democrat will save us — they are champions of white supremacist capitalism.

If you live in Philadelphia, we would love to hear from you. Send Left Voice your pictures and videos of the uprising, as well as your writing about the struggle happening now! Email us at [email protected]