Philly Teachers Return to School, but the Fight for Safe Re-openings Continues

Again and again, Philly’s public school teachers have defied the school district, refusing to come back to unsafe buildings. This week, they won some concessions in a deal to reopen the schools. But major fights lie ahead. 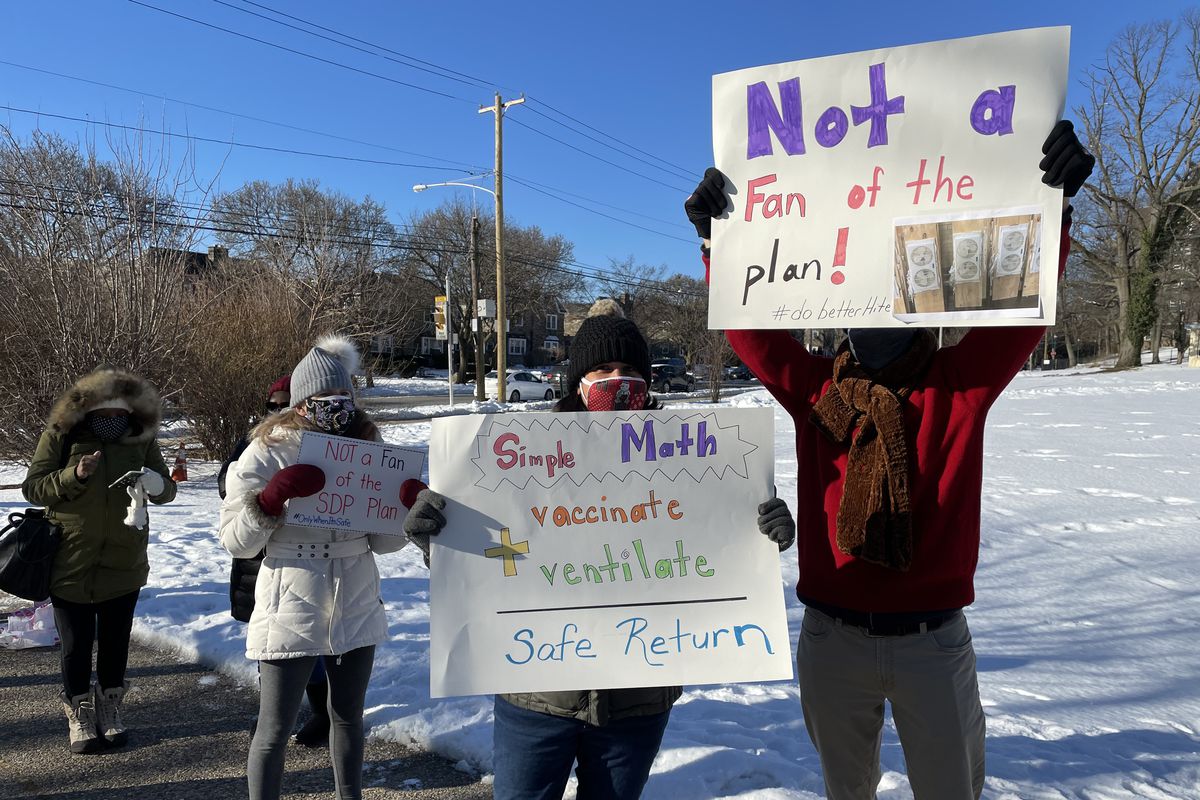 Teachers protest outside Gompers Elementary in February, 2021. The deal reached in March to reopen schools got rid of a pathetic measure to ventilate classrooms with window fans. (Johann Calhoun / Chalkbeat)

After months of fierce negotiating, Philadelphia teachers agreed to return to classrooms starting March 1. But the fight for a truly safe reopening — and against more attacks from the city and school district — continues.

The School District of Philadelphia (SDP) has been demanding for months that Philly’s union teachers return to their classrooms in the middle of a deadly pandemic. Three separate times, the union refused.

The fight came to a head in the district’s fourth attempt to reopen at the beginning of this year. The SDP announced pre-K through second grade teachers must return to their classrooms February 8. The Philadelphia Federation of Teachers (PFT), which represents Philadelphia’s educators and school staff, refused. Teachers should defy the order, said union president Jerry Jordan, but continue teaching remotely.

At the eleventh hour — the Sunday night before the reopening was supposed to happen — Democratic Mayor Kenney stepped into the fray. Any decision about reopening, he declared, would rest with a mediator, who would determine whether schools met safety standards.

That Monday, teachers protested anyway, holding signs, teaching and grading in the bitter cold outside their elementary school classrooms. The same day, the union’s defiance won a major concession from the city. Kenney announced he’d be launching a program to vaccinate all of the city’s public school staff in the coming weeks.

While Jerry Jordan called for patience and trust in the powers-that-be, the rank-and-file Caucus of Working Educators (WE) took the fight to Kenney himself on February 12, protesting in front of his chic Old City home.

Finally, a deal was announced on March 1 between the school district, union leaders, and mayor. According to that deal, 53 of the district’s 150 elementary schools are cleared to open. Teachers at schools on that list reported to their classrooms on Wednesday, March 3. The first kids will arrive this coming Monday. After that, more schools will be assessed and approved weekly. The deal also includes COVID-19 testing for all staff every week, and testing for a portion of students each week.

The deal highlights just how dangerous the School District’s original plans for reopening were. As the WE Caucus pointed out, Superintendent Hite had been shrieking for months about how safe the school’s buildings are, holding up Nebinger Elementary as proof. Yet Nebinger itself didn’t make the list of schools to open. After a battle by the rank-and-file and weeks of negotiations, the current deal takes steps to keep teachers and students safe. The district has abandoned its laughable plan to use cheap window fans to “ventilate” buildings. More than this, the deal includes a provision that schools can’t open unless the asbestos in their walls and ceilings has been dealt with — a sign of the crumbling, dangerous buildings that teachers have been teaching in for years.

An Important but Partial Win

The deal is imperfect, but still a win for education workers.

It was the union’s refusal to return to in-person classes — often spearheaded by rank-and-file members — that forced the city to make teacher vaccines a real priority. More than this, it seems the union beat back at least some of the punishments Hite and his lackeys planned for teachers. In a February email, for example, Hite’s office promised that if teachers refused to come back, they would be denied time to set up their classrooms before classes start — petty revenge that has been abandoned.

And because the union fought off four unsafe reopening plans, it bought time for coronavirus numbers to fall. If Hite had his way, schools would have been open throughout some of the deadliest surges of the virus. In mid-December, there were almost 1,000 new cases being reported a day in Philadelphia. On February 8th — when Hite again demanded teachers return — there were 345. On March 3rd, when the first teachers returned to their classes, there were 232. That delay means possibly avoiding infections in teachers and students, their families and communities, maybe saving lives.

But the deal has real limits. Even with the vaccination plan they won, many teachers are coming back either unvaccinated or without having enough time for the vaccine to fully protect them. According to Philadelphia’s Department of Public Health, the risk of infection in the city remains “high.”

The danger from the virus is still real and present for staff — like Kate Sannicks-Lerner, who has a vulnerable partner at home — that haven’t been granted accommodations to teach remotely. And as teachers started returning to the 53 supposedly safe schools on March 4, the WE Caucus and others posted pictures of filthy classrooms with poor ventilation.

Despite the promises of Democrats and others, recent weeks in Europe show the dangers of opening too soon. School heads in Europe opened the doors to students, declaring buildings safe, but were soon forced to close them again in the wake of outbreaks and mounting evidence that “children are a considerable factor in the spread of Covid-19.”

Crucially, the union’s leaders — especially national ones — are wasting a vital chance to strengthen the fight and win far more. Across the country, public school staff are facing the same fight: to stop wildly unsafe reopening plans in the middle of a deadly pandemic that has already claimed half a million lives — and counting. That fight is happening outside Pittsburgh, and in Los Angeles, Chicago, and beyond.

A coordinated fight by teachers’ unions against returning — like a national teachers’ strike — could build solidarity and power across those struggles. But those fights are happening in separation from each other.

It’s no secret why union leaders are dragging their feet when it comes to a wider and more militant struggle. Union heads like Randi Weingarten, president of the AFT, sometimes talk tough about protecting teachers’ safety. But she’s in Biden’s pocket. Her reopening strategy revolves around begging for table scrap reforms from the Democrats while posing for pictures with Biden. In the last election she played the faithful servant, with AFT endorsing Biden and advertising him as the salvation for teachers.

But Biden wants schools open regardless of the cost. He’s echoing the entire ruling class, from Trump to the Wall Street Journal and Bloomberg. So it’s no wonder that Weingarten is allergic to any mention of a wider, more powerful strike. A more militant struggle is key to winning real teacher safety, but it is also essential to winning demands that teachers have been making for years, including real school funding, decent pay and benefits, and cops out of schools.

A key lesson from Phlly, though — and from the recent Chicago Teachers’ Union, too — is that the teachers’ win comes despite and against the Democratic Party. It comes because of the power they hold as workers.

More Fights on the Way

The PFT’s fight with the city and the school district bosses like Hite is far from over.

Now the school district has to be kept to its word — ensuring that schools actually do have adequate ventilation and other virus safety measures, and that the asbestos actually is remediated. Even then, the fight remains to actually invest real funds in Philly’s crumbling school system.

And this summer, the PFT’s contract ends. The district will almost certainly be vicious in attacking worker pay and benefits. This has been the SDP’s method long before the pandemic, when schools across the city were shuttered and the union worked without a contract for long periods of time. But this time, the district will be under even more intense pressure from the mayor’s office. In the middle of the battle with the teachers’ union, Mayor Kenney announced a $450 million shortfall in Philly’s budget, saying “everything’s on the table” as a target for budget slashing. The Democrats in charge are sure to demand that the working class pays for the crisis.

Winning these fights is going to take a united struggle of Phlly’s working class and oppressed. And there are possibilities for just that kind of struggle. SEPTA’s transportation workers’ union, too, will be renegotiating a union soon — and those workers face many of the same dangers, from the pandemic to the budget crisis. Building solidarity actions with them could be a key lever of power. And this past summer showcased the power in Black and anti-racist struggle in Philadelphia. In June, almost 70,000 people protested racist police murders on a single day.

These struggles are deeply connected. Many of the kids in Philly public schools are Black and Brown, as are many teachers, SEPTA workers, and the people SEPTA transports. Schools are just another place for cops to stalk, harass, and attack Black lives. And cops rely on the city’s busses to transport hordes of cops to attack protesters. The fight by Philly’s workers, in other words, is just another and crucial form of the fight for Black lives that rocked the city not long ago.

United, the working class and oppressed can win the fights ahead.