The Biggest Revolt of the 21st Century: Ten Years after the Arab Spring

Ten years ago today, a young fruit vendor in Tunisia, Mohamed Bouazizi, set himself on fire after being harassed by the police. Shortly thereafter, protests started in Tunisia and quickly spread throughout the Middle East and North Africa. What can socialists learn from the Arab Spring and its aftermath? 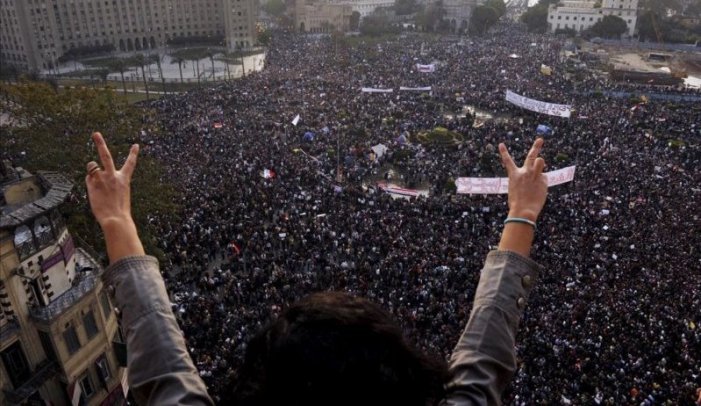 Ten years ago, in a small town in Tunisia, North Africa, a young fruit vendor was arrested and humiliated by the police because he did not have a permit for his cart. The police confiscated the weighing scales the young man used to collect ten dinars (approximately seven dollars at the time) each day to feed his widowed mother and six siblings. The young man, Mohamed Bouazizi, set fire to his body in front of the city hall out of feelings of powerlessness and frustration.

Word of Bouazizi’s action traveled quickly. Thousands of unemployed and poor young people in the city identified with Bouazizi’s living situation. Their pain and anger exploded into the largest demonstrations in the history of the country. On January 14, almost a month later, Zine el-Abidine Ben Ali’s 23-year-old dictatorship was overthrown.

The immolation of the young worker in Tunisia marked the end of several governments in the region and started the biggest and most widespread class struggle of the 21st century. In a few months, all the regimes of the Middle East and North Africa, from Morocco to Iran, saw the birth of unprecedented protest movements that shook their structural bases.

From the “authoritarian republics” of Tunisia, Egypt, Algeria, Libya, and Syria; to the monarchies of Saudi Arabia, Bahrain, and Jordan, still governed by tribal pacts and traditional links with imperialism; and outside the Arab world: Turkey and the Islamic Republic of Iran; the regimes were overwhelmed by the uprisings.

The 22 countries of the region faced serious political turbulence. They tried different strategies to repress or divert the process of mobilization: undemocratic maneuvers, military coups, and violent elimination. These tactics gave rise to a complex dynamic of revolts, prerevolutionary processes, counterrevolutions, and civil wars that resulted in the collapse of several of these regimes.

Revolution, Revolts, and Counterrevolution in the Arab Spring

The Arab Spring was not a lightning bolt in a serene sky. The conditions for the popular uprisings of 2010 to 2012 had already been germinating.

The countries of North Africa went from being agricultural civilizations to importers of the 2008 crisis — due to desertification, the abandonment of rural areas, and the increase in oil prices. This resulted in a desperate situation for the whole area in terms of food and water and ever-deepening poverty conditions at the hands of a repressive state. The “bread riots” announced prematurely what was coming.

Bouazizi’s immolation triggered protests in Tunisia, and they quickly spread to Egypt. The popular rebellions overthrew the lifelong dictatorships of Mubarak and Ben Ali in early 2011. The uprisings were composed of the urban poor, young people, students, and workers. They were bursting with political slogans and methods learned during the “bread riots,” although they didn’t have a clear program or concrete political direction.

Then, a period of “transition” began in which traditional political movements, such as Ennahda (Renaissance) in Tunisia and the Muslim Brotherhood in Egypt, rose to power. Both parties linked moderate political Islam to a traditionalist bourgeoisie and combined the principles of Islamic social organization with those of capitalism and modernity.

The elections in Egypt, where the Muslim Brotherhood came to power, were orchestrated by the army and imperialist powers. After two years, President Mohamed Morsi tried to centralize power and Islamize the country, but millions of people took over Tahrir Square in opposition to his plan.

The turbulent political situation and the absence of an alternative political party — one that represented the working people’s demands to break with imperialism and the local bourgeoisie — afforded the army the opportunity to carry out a coup d’état in 2013. General Al Sisi crushed the “democratic illusions” of the demonstrators with a massacre of 800 people in one day, a record in the 21st century, and established a dictatorship that was equal to or worse than the previous one.

In Tunisia, a Constituent Assembly was called in response to the demonstrations. Ennahda proposed “to Islamize the country” and managed to contain the frustrations of hundreds of thousands of unemployed young people by building “national unity” with the secular parties until its electoral defeat in 2014. However, the country’s structural problems, such as poverty and unemployment, have continued to worsen. And after years of the “democratic” experience in Tunisia, the economic structures and the repressive apparatus that sustained the dictatorship of Ben Ali still remain in power.

In Syria, Libya, and Yemen, the processes of mobilization were aborted due to prolonged civil wars. Imperialist powers intervened by arming groups similar to or even directly related to NATO, as in Libya. Regional powers like Iran and Saudi Arabia — which had recently suppressed an uprising in Bahrain — took advantage of the power vacuum in accordance with their individual hegemonic projects. Since then, they have been confronting each other in a “cold war” by fighting through allies outside their territory. Local actors, including remnants of the old armies, tribes, Islamic militias, sectors linked to the illegal economy, and autonomous communities, make controlling and maintaining territory possible despite a changing system of alliances.

The war led to hunger, chronic disease and other humanitarian emergencies. Millions of people tried to escape to Europe and other countries, resulting in a refugee crisis.

As previously noted, all of the mobilizations of 2011 were crushed or diverted. The “democratic” reforms expropriated the discourse of the demonstrators, but did not resolve the structural problems driving the movement. This allowed local powers to reorganize themselves and establish new ties with imperialist countries.

Civil wars opened up more complex political scenarios. The emergence of jihadist militias — linked to regional interests and the collapse of power structures — legitimacized reactionary responses to popular demands by the dictatorships and former U.S. president Obama, who was operating under the cover of a “war on terrorism.” As the region’s social and political fabric continued to crack, forces like the Islamic state consolidated, even going so far as to control major cities in Syria and Iraq.

The changing political climate also encouraged Russia and Iran to defend Al-Assad and intervene in Iraq, Libya, and Yemen in an attempt to achieve greater presences in the territory. With the United States in strategic retreat, this new dispute for control of the Middle East opened a complex scenario for regional hegemony. The Trump era saw the United States resort to cementing several Arab countries’ alliances with Israel and procuring recognition of the Hebrew state. The United States’ aim is to encircle Iran’s advances in the region while redirecting resources to the confrontation with China in the Pacific.

The lack of an organization of the masses independent of local bourgeois leaderships — which would never confront imperialism head-on — allowed the ruling classes to reestablish their authority at a high cost. However, their power in the Middle East was weakened after the hurricane of 2011.

The Arab Spring introduced symbols and traditions of struggle that remained dormant until this world crisis, when they were reinvigorated and pushed towards a new phase of revolts.

In 2018, against all odds, a new wave of enormously popular movements overthrew two lifelong dictatorships (Omar al-Bashir in Sudan and Abdulaziz Bouteflika in Algeria) and put several Middle Eastern governments (Iraq, Iran, and Lebanon) on the ropes.

Lessons from the Arab Spring

Sectors of the oppressed classes intervened in both the first years of the 2008 crisis — most notably, the revolutionary processes of the Arab Spring — and the current crisis. The “relative losers” of globalization, which consists of young people without opportunities and the ruined middle class of low-wage professionals, and the “absolute losers” of globalization, including populations living in extreme poverty and marginalization, were instrumental in these historical events. However, the destructiveness of war resulted in humanitarian crises for these most marginalized sectors of the population, including food insecurity (deaths from cholera and starvation in Yemen, for example) and the largest number of refugees and displaced people in the world.

The industrial working class’s participation in the protest movement was important. But by assuming a “citizen” identity without disputing the hegemony of the ruling class, it did not manage to make its strategic position count. Additionally, the uprisings lacked political leadership that could propose a break with imperialist powers and Islamist and progressive parties. The movement succumbed to these bourgeois democratic parties while preserving the role of these countries as minor partners of Western powers or, as in the case of Syria, clients of countries like Russia and Iran.

The Arab Spring of 2010 to 2012 was not a revolution from the point of view that the bourgeoisie managed to retain power despite the reconfiguration of sociopolitical structures. However, it remains a historical milestone with enormous symbolic significance that continues to live in the collective consciousness of the youth, workers, and women of the Middle East and North Africa. Its impact extends throughout the world; the Indignados movement in Spain and Occupy Wall Street in the United States are resounding examples of its reach.

Almost a decade later, the structural elements that sparked those initial revolts remain in place, and some conditions have even worsened. The new protests that have broken out in different countries of Africa and the Middle East since 2018 are proof that a historic rupture has taken place.

In all of these countries, a new cycle of unrest has reproduced many of the same characteristics as the Arab Spring. As was the case ten years ago, spontaneous popular revolts are being led by marginalized and combative youth. Their demands are, once again, related to the conditions of inequality, precarious labor, and racism, as well as spectacular levels of exploitation that have been aggravated by the pandemic. These prolonged demonstrations will be a major problem for the governments of the Middle East in the coming months.

The Arab Spring demonstrated that imperialist powers and local bourgeoisies forces will offer solutions that are democratic in name only. For this reason, revolutionary strategy should start with class independence. This way, during the region’s next period of class struggle, working people can rise up as a class to destroy the shackles that oppress them.