The Cops Opened the Gates for Trump Supporters at the Capitol

As right-wing mobs stormed the U.S. Capitol this evening, Capitol Hill police stood idly by, moving barricades to let them in and taking selfies with members of the mob. 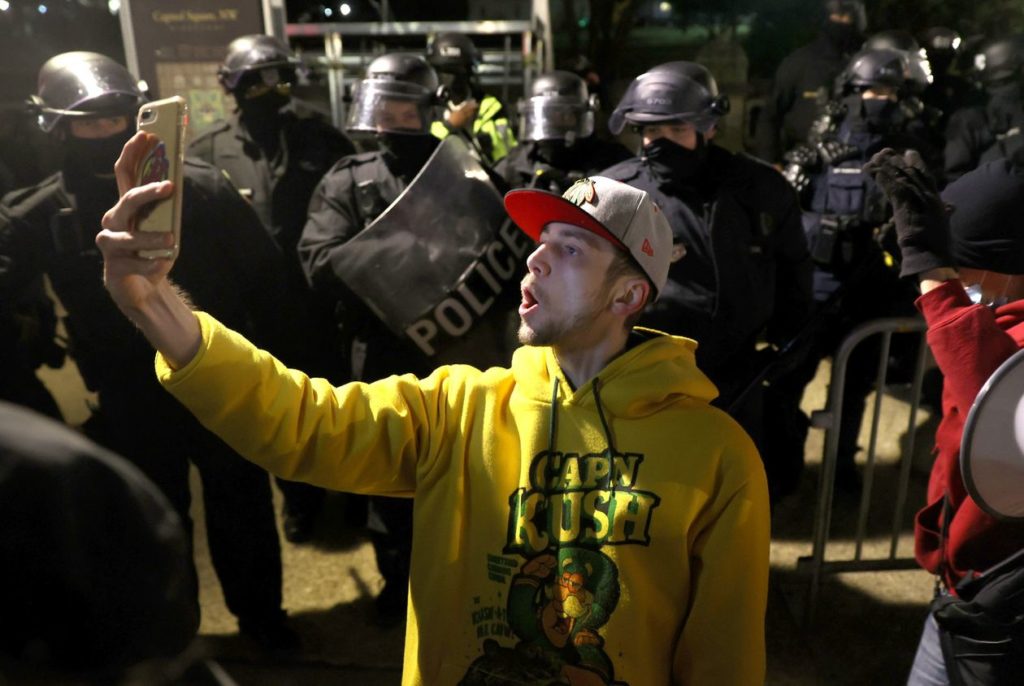 A Trump supporter takes a photo of himself with police officers in riot gear on Wednesday. GETTY IMAGES

Six months ago, armed police in riot gear closed the streets around Capitol Hill and stood on the steps of the Capitol building, waiting for peaceful protesters who were gathering to demand justice for Black lives and protesting against violent and racist terror. Today, the same forces stood almost idly by as a far-right mob swarmed Capitol Hill, protesting the results of an election they’ve been whipped up by Donald Trump to believe was stolen.

The evidence is clear: videos all over social media show Capitol police opening the gates and removing the barricades that stood between the throngs of protesters and the Capitol building. Within the building too, cops are shown offering no resistance —  actually retreating — as the rioters move further and further into the building.

Black Lives Matter protesters were on the receiving end of baton beatings and tear gas only months ago. Today, Capitol police indulged the far-right mob with selfies as they were enveloped in chants of “ACAF” — All Cops Are Friends.

Indeed, cops and right-wing extremists have long been friends. The pandemonium that has unfolded over the course of Wednesday in the heart of Washington, D.C. has been possible only because of the tacit support of the police. Whereas Black Lives Matter protesters were violently tear gassed, chased across the city’s blocks, and arrested en masse mere months ago, today the police gave violent protesters nearly free reign in the heart of the U.S. capitol city — without putting up any serious fight.

From the Boogaloos to the Klu Klux Klan, the police have a long and celebrated history of collaborating with right-wing militias, if not, at least, turning a blind eye to their rampage. In more recent history, we only need to contrast the cop response to Kyle Rittenhouse, who shot and murdered two protesters in Kenosha, Wisconsin, a few months ago during protests against the police shooting of Jacob Blake, to the murder of unarmed Michael Reinoehl, who was gunned down by the police.

The cops are not our friends. They do not protect our rights and our lives. They “serve and protect” capitalism and the injustice system aims to keep the working class and oppressed in line. It is only natural that they align themselves with far-right terrorists. That’s why our demand should ring out across the country: Abolish the police!

Sou Mi is an activist from New York City.