The Democrats Won’t Save Democracy

While Republicans are attacking voting rights, the Democrats are pretending they’re champions of democracy. They’re not. Real democracy has to be fought for and won — from the bottom up. 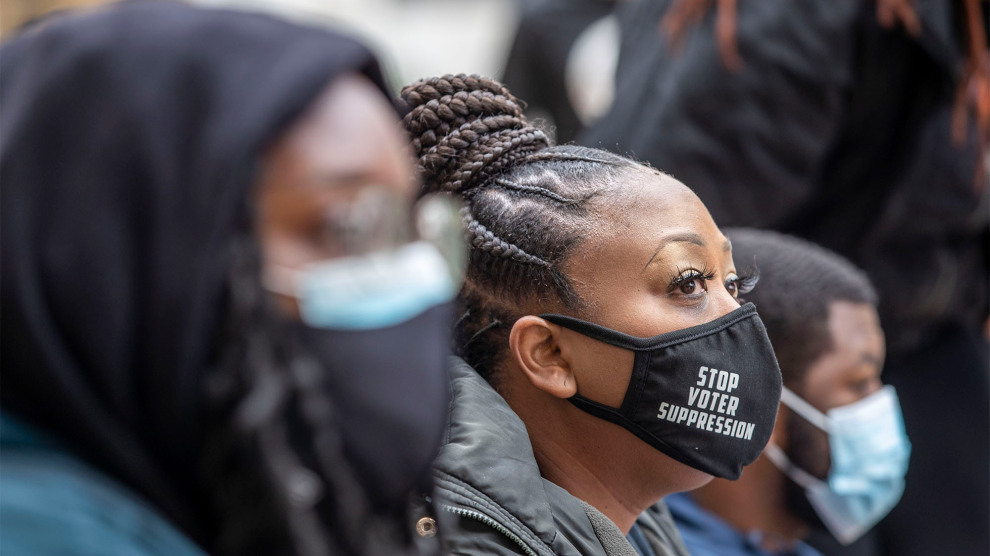 Demonstrators chained together protest HB 531 outside of the Georgia State Capitol Building on day 25 of the legislative session in Atlanta, Monday, March 1, 2021. (Alyssa Pointer/Atlanta Journal-Constitution via AP)

The Republican Party is fighting tooth and nail to attack the democratic right to vote.

Georgia Republicans rammed through a law in late March to make it harder to vote. The law steps up the ID requirements for voters to mail in their ballots. It also makes it illegal to hand out water and food to people who are waiting in line to vote, and it limits the number of “drop boxes” for people to vote early. More than this, the law would help Republicans pack its State Elections Board with members of its own party — and to control some of the local election boards’ actions and decisions too — during an election season. This would make it easier for Republicans to overturn a vote they don’t like.

It’s no mistake that the Republicans started their most recent fight against voting rights in Georgia. Just after last year’s election, Trump pushed the governor to magically “find” enough votes for a Trump victory in that state. And Trump’s campaign tried, and failed, to recruit the governor and representatives in Georgia to overturn the Georgia election results. Beyond the presidency, the Democratic Party also won both Senate seats, giving them a majority in both the Senate and the House of Representatives for the first time in years.

The attack on voting rights in Georgia is hardly an isolated incident. It’s part of “the most extensive contraction of voting access in generations.” Bills like Georgia’s already passed in Florida, Texas, and Arizona; more seem to be on the way.

These bills are, above all, an attack on the voting rights of Black and Brown people.

For example, it’s in majority-Black neighborhoods in Atlanta and beyond that voters are more likely to stand in long lines. Making it illegal to hand out food or water to people waiting to vote is a way of trying to get Black and Brown people to leave those lines and go home.

And requiring certain IDs to vote is a way to keep people of color from being eligible to vote in the first place. The process of getting a state-issued ID can be an expensive and time consuming bureaucratic circus. So it’s one that affects the poor most of all, and capitalism disproportionately forces people of color into poverty.

More than this, the GOP means to give more power and autonomy to “poll watchers” to “protect” voting. It’s a tried and true method of voter intimidation to keep Black voters and others who skew Democratic from coming to vote, for fear of being harassed or attacked.

Threats of violence, too, were crucial for keeping Black people from the polls in the South. The Republican call for “poll watchers” is just a veiled call for more voter intimidation.

Biden and Co. Won’t Save Us

The Democrats are trying to brand themselves as the party of real democracy. Biden called the new law in Georgia “Jim Crow on steroids”; Stacy Abrams and other Democratic Party functionaries are speaking out, too.

But the Democratic Party is no champion of democracy.

For just the most recent example: Biden’s administration approved $735 million in more weapons to Israel in the middle of Israel’s massacre of Palestinians. Democrats, like the Republicans, fully support Israel’s brutal, obscene denial of even the most basic democratic rights of Palestinians.

That’s just business as usual. Both Democrats and Republicans champion violent attacks on democratic rights across the globe as long as it’s good for US capitalism — an inspiring example of bipartisanship. Under Trump, the U.S. supported the coup attempt in Venezuela in 2020 and the coup in Bolivia in 2019; under Obama, the coup in Paraguay in 2012 and the coup in Honduras in 2009. That only covers the last decade or so.

Here at home, too, the Democrats are no warriors for democracy. First, Biden was one of the architects of racist mass incarceration that deprived huge numbers of Black and Brown people the right to vote once imprisoned. And the Democrats reject the call to abolish or defund the cops again and again — cops who daily attack the most basic democratic rights of Black and Brown people by harassing them, beating them, and murdering them in the streets.

Don’t forget it was Democratic mayors and governors who led the savage attacks against the democratic right to protest last summer. During the BLM uprising, they called in the National Guard, imposed curfews, and trapped, gassed, and beat protesters. Both Republicans and Democrats — like Portland’s Democratic mayor, Ted Wheeler — are imposing new laws against the democratic right to protest after last summer. Biden has been silent as the grave on those measures.

Finally: Biden and his party gush about the genius of an American political system that’s barely democratic to begin with. It’s a system that relies on unelected judges who serve for their entire lives — the Supreme Court — and a Senate and electoral college that exist to deprive the masses of workers and oppressed of a real voice in government.

Real Democracy Has To Be Won — From the Bottom Up

Why can’t the Democrats be the champions of democracy?

They use the word democracy, and their outrage about attacks on voting, to try to maintain their hold on power. But we know whose interests they protect. It was Biden who had the most billionaire backers in the 2020 election.

It’s the interest of that class — the ruling one — that both the Democrats and Republicans champion when they help overthrow demcracies across the globe and when they sell Israel the bombs it uses to murder Palestinian children without blinking an eye.

Biden and the Democrats are fighting tooth and nail to save the capitalist system and the power of the ruling class. Massive rebellions like the BLM uprising in 2020 can turn into real threats to that class’s power. So the Democrats talk endlessly about democracy and voting rights; they may even push for laws or drive lawsuits against the Republicans’ new anti-voting measures. But they will never be champions of the kind of real democracy that would shake their power and threaten the ruling class’s wealth.

Real democracy has to be won by the working class and oppressed, the vast majority of the U.S. population. We can only win it against both the Republicans and the Democrats, who serve the ruling class. And we can only win it by fighting for it with our own weapons: by striking for it at work and by rising up to fight for it in the streets.