The cops are stealing bikes from protesters and beating them as they attempt to get home during the curfew. 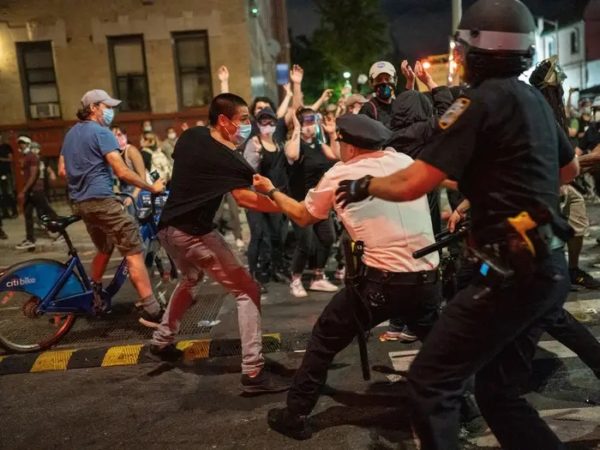 Despite arrests and repression by the police, today, for the third night in a row, thousands of people in NYC broke the curfew to demand justice for George Floyd, to say that Black Lives Matter, and to protest racist police violence. These protesters were not deterred by police brutality. Nor were they deterred by the fact that all four cops were charged in Minneapolis and the charges against Derek Chauvin were increased from third degree to second degree murder. Police brutality is a systemic problem and these small concessions won’t cut it.

Tonight is the third night of the draconian curfew in NYC instituted by Gov. Cuomo and Mayor De Blasio. It is the second night of the more restrictive 8PM curfew, that also cancels Uber, Lyft, and even Citibike services. In fact, in Manhattan it was impossible to get a Citibike two hours before curfew began. Although public transportation is running, all non-essential travel is barred in Manhattan. Even people who call Ubers before the 8PM curfew are being pulled over and questioned while in transit by the police.

This has left thousands of people stranded in Manhattan, unable to return to their homes, and as sitting ducks for the police. In an effort to have an option to safely and quickly return home, some protesters have ridden their bikes to the protests. However, videos have emerged of the police stealing protesters bikes and beating some protesters trying to flee while on their bikes. This follows a pattern of police violence against protesters, including the most blatant in which a police van drove straight into protesters on Saturday.

While the liberal media keeps replaying videos of the police kneeling with protesters, in reality the police are exactly the assholes in the videos, stealing peoples bikes, leaving people stranded in an empty, boarded-up city, and beating them with batons. The rage of protesters can’t be quelled by crumbs or empty symbols. That’s why the fight for Black lives and against police violence is not stopping.

the @nypdnews are stealing bikes and telling protestors to get home with everything shut down pic.twitter.com/dFEZs43aAf

drivers are witnessing the @nypdnews beating people trying to get home pic.twitter.com/9uQV9JYS7K