“This Strike’s Far From Over”: Interview With a Striking Miner In Alabama

Over a thousand coal miners are on strike in Alabama and have recently voted down a tentative agreement to end the dispute. Left Voice interviewed one of the miners about the situation on the ground and why they voted to continue the fight. 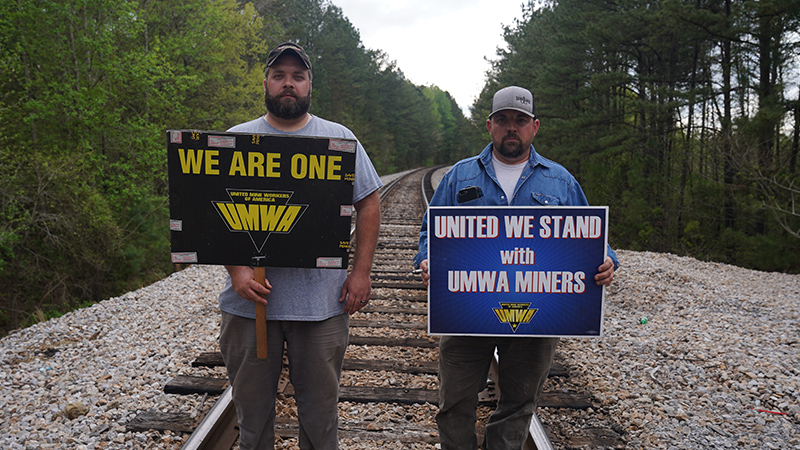 Coal miners in Alabama have been on strike since the beginning of April, demanding higher pay, better healthcare, more time off, among other things. In an attempt to end the strike, the bosses at Warrior Met offered the strikers a lousy deal, which some workers described as a “slap in the face.” In a surprising move, the rank-and-file miners voted to reject the tentative agreement and continue the strike.

Left Voice spoke with a miner who asked to remain anonymous about the situation and the next steps for the union. The following is a slightly edited transcription of the interview. All identifying information has been redacted.

What do you think about the “no” vote on the contract?

I couldn’t be happier about the vote. I’m so proud of my union brothers and sisters for voting no.

Why are you proud about how you all voted?

‘Cause they done us wrong for five years. They’re getting $30,000 bonuses. We’re not. Our bonuses are based off the budget. The most I’ve ever gotten, ever is 500 dollars.

Left Voice is hosting a panel with an Amazon worker in Bessemer and Robin D.G. Kelly, author of Hammer and Hoe, to discuss the results of the unionization vote. Sign up, or check out the Facebook event.

The boss is getting $30,000 bonuses. He’s not running the mine. He’s not going up and down the mine. It’s high time we stood up and said, we’re not going to be pushed around.

You hear the boss about the new house on a lake. How did you get that? Oh yeah, I run coal for you. It’s time we stand up and say we aren’t gonna take this.

What are some of the struggles of miners?

Mining is serious business when you get down there because you’re dealing with people’s lives. If I don’t come out of that mine and the foreman does, now the foreman has to tell my wife and my baby “daddy won’t come home today.”

We play a real serious game, day in and day out. I’m happy because we’re not gonna take it anymore.

It’s not just that they won’t let us out from underground or can’t find us. It’s a hard task to have 300 men underground. You have to call underground and it’s like “where is so and so at” and you have to track them down.

And you can’t just call in, and tell them what’s going on and take the day or you gotta go. You gotta worry about facing repercussions for it. They don’t understand, they don’t care. We’re a number.

I’m happy my brothers and sisters are willing to stand up and see that we have to fight for better.

What do you see as the future of the strike? What is most important to you to get in the new contract?

This strike’s far from over. Quite frankly, I think this is the beginning. Now is when we find out who is gonna stand strong, how strong and how united we are gonna be.

I hope our struggle will set a precedent for all other workers out there, for our union brothers and sisters across the country. Unionization is real low right now and we have to show our strength. And well, Amazon, I don’t understand how or why Amazon got voted down. It must just be real hard over there with the boss and everything. Maybe they’ll see our struggle and we can make a difference there too.

The working class of America come together as one, say no to corporate America and corporate power. We need unification so you can’t be stomped on like a bug.

What do you think about the Amazon union?

It’s harder to unionize when you don’t have that history. When the UMWA was formed it took blood. It took literally a war to start the united mine workers. It’s so hard to start a union.

So it’s real hard to do what the Amazon workers are doing. We’re fighting, but we already have a union. We are already united. Those guys are fighting Amazon. Amazon. It’s like they’re fighting the world.

But I know we have to unite the working class. Standing together we are stronger. Amazon, mine workers, all the workers. It would be a good start for America. Corporations are dividing us. In the end, they make lots of money off us. If we stand together, maybe we can start to change it.