Thousands of Protesters Are Trapped by Cops on the Manhattan Bridge

Developing story: Thousands of protesters are currently stuck on the Manhattan bridge. The police have blocked both sides of the bridge. 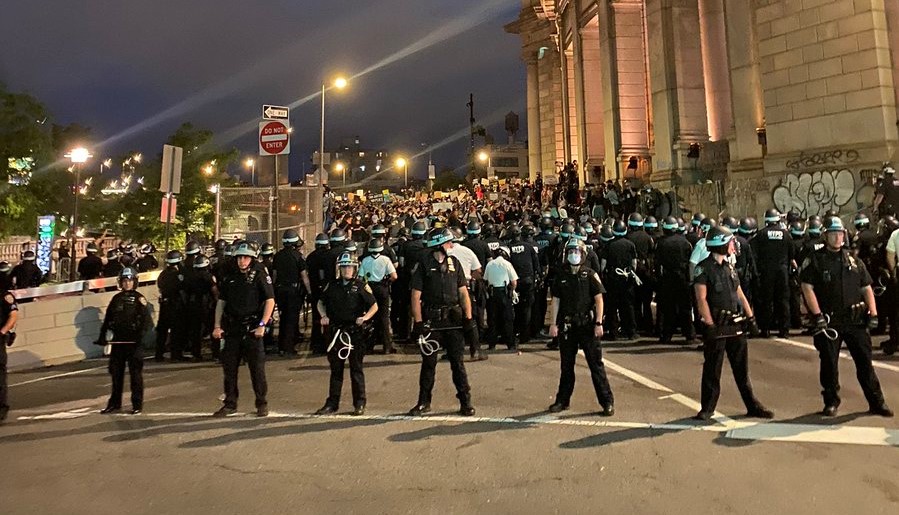 Today was one of the biggest days of protests in NYC, with tens of thousands joining protests around the city demanding justice for George Floyd. One began at Foley Square and another at Stonewall, with protesters taking the streets and eventually meeting up near the Manhattan bridge. Protesters spoke out against police brutality, including George Floyd, Breonna Taylor, and Black trans man, Tony McDade.

All day, these were, indeed, “our streets.”

At 8 pm, the curfew imposed by Mayor De Blasio and Governor Cuomo took effect. What had been a consistent police presence immediately doubled and people began to be arrested. The protesters took care to not instigate the highly armored and heavily armed police officers.

As they attempted to cross the Manhattan bridge, hundreds of cops deliberately blocked the bridge on the Brooklyn side. As the protesters went back to Manhattan, the exit of the bridge was also blocked.

NYPD has trapped thousands of protesters on the Manhattan bridge, refusing to let them pass, while curfew is on.#BlackLivesMatter #AbolishThePolice #TheStateIsResponsiblepic.twitter.com/bnq1R1U2VY

As such, thousands of peaceful protesters are currently trapped on the Manhattan bridge. They are chanting “we have to pee” and “De Blasio, where is your daughter”— in reference to his daughter that was arrested by the police at a recent protest.

HAPPENING NOW: Stand off. Protestors walked Manhattan Bridge – now facing off with police blocking their entry into Manhattan. There are hundreds of officers here. So far no movement. ⁦@ABC7NY⁩ pic.twitter.com/GGbRHuxZJF

These repressive curfews are instituted by Democratic Party politicians who are speaking out of both sides of their mouths. They pretend to be on the side of the movement for justice for George Floyd, but in reality, they are instituting draconian curfews, arresting thousands of protesters, and in many states, calling on the National Guard.

Update (11:12PM EST): The protesters have been allowed to pass over the bridge.  Many were arrested.