On Wednesday, Joe Biden announced that all U.S. troops would leave Afghanistan by September 11. Though this date is symbolic, 20 years after 2001, Biden’s policy shift illuminates the failures of imperialist interventions in the region and new strategic priorities for U.S. imperialism. 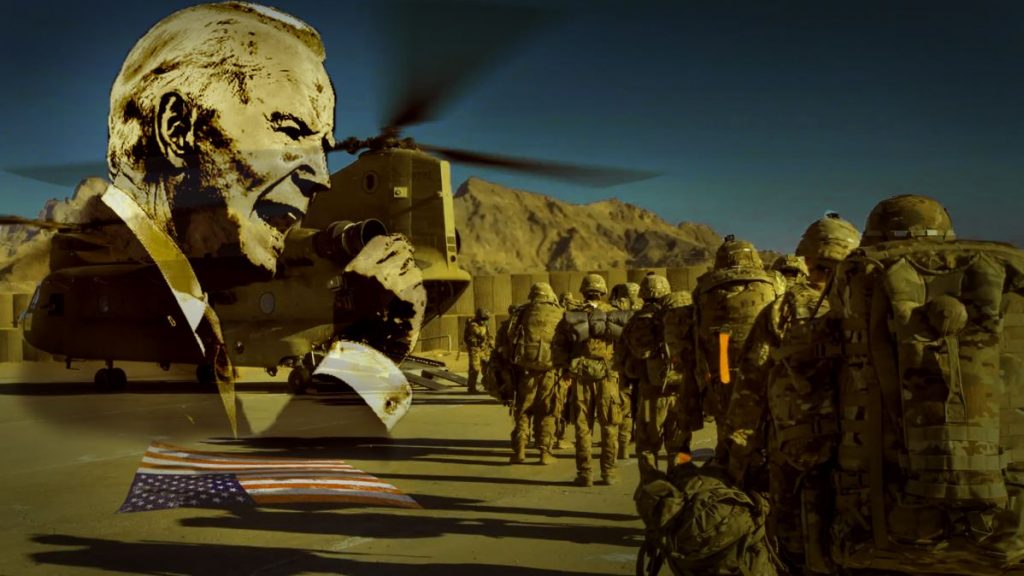 This Wednesday, during a speech at the White House, President Joe Biden announced the total and unconditional withdrawal of U.S. troops stationed in Afghanistan on military missions. The withdrawal is set to begin on May 1 and will be complete before the symbolic anniversary of the attacks on the Twin Towers and the Pentagon — the 20th anniversary of the biggest attack on U.S. soil.

The Biden administration’s decision technically extends the American military presence beyond the May 1 deadline for a “peace” transition that Donald Trump had agreed to in Doha in 2020 with the Taliban. The number of U.S. troops on military missions currently stands at 2,400 according to official data, although some estimates put the number above 3,000, plus the 7,000 troops that make up the U.S.-led coalition. The withdrawal will likely involve enormous costs, as mobilizing equipment and facilities stationed in the territory for 20 years will take months.

This afternoon, I’m announcing the withdrawal of U.S. troops from Afghanistan and providing an update on the path forward. Watch live. https://t.co/SPiLX24VdM

The beginning of American decline

In 2001, President George W. Bush launched an offensive in Afghanistan in response to the traumatic attacks of September 11. The pretext was that the Taliban government was harboring al-Qaeda leaders, including Osama Bin Laden. At that time, the neoconservative US president was able to forge an alliance with powerful local warlords – remnants from the war against the Soviets and subsequent civil war during the 1990s – who had retreated to northern Afghanistan to quickly overthrow the Taliban government (which was recognized only by Saudi Arabia, Pakistan, and the United Arab Emirates).

The distribution of ethnic groups in Afghanistan and Pakistan. The red zone represents the territory that used to be Pasthunistan. Source: World Future Fund

The war lasted a few days, the Taliban barely resisted, and then they escaped to take refuge in the mountains and regain strength with the prospect of returning to Kabul. Since then, an unstable government, commanded by leaders of different Afghan minority ethnic groups (Uzbeks, Tajiks, Hazaras, etc.), has been in power. This resulted in a weak government that was maintained thanks to the U.S.’ political support and military presence along with NATO’s. Bush’s intervention in Afghanistan was the first step for subsequent interventions in the Middle East and the “endless wars” that proliferated over the following years during a period of relative hegemonic decline for the U.S.

In 2009, Barack Obama received the Nobel Peace Prize for, among other things, withdrawing troops from Afghanistan. But as soon as the Taliban regained some territories and became visible again, he flooded the country with tens of thousands of U.S. troops. Since then, the withdrawal has been gradual.

During his administration, Obama sought to reestablish U.S. hegemony and the credibility lost during the Bush years through a multilateral approach through institutions like the G20 and NATO. Though Obama had attempted to give the United States a humanitarian facelift, he earned the nickname “drone king” because of the record number of covert drone killings he carried out during his tenure. Despite Obama’s approach, the Obama administration could not avoid the decades-long trend of a relative decline of the U.S empire, a trend which was intensified the day the United States entered Afghanistan.

Therefore, the administration architected the “pivot to Asia” which Trump continued. During this, it became imperative for U.S. imperialism to withdraw economic and military resources from the wars in the Middle East and instead put attention on the emerging enemy number one: China. In Trump’s case, the hardline aimed at China was legitimized by a social base which included Americans impoverished by the relocation of companies to destinations with cheaper labor and the nationalist bourgeoisie.

In many ways, Biden’s approach is a synthesis of Trump and Obama’s objectives, imbued with a sense of pragmatism. In his own words: “Rather than return to war with the Taliban, we have to focus on the challenges that are in front of us.” For Biden these include challenges in the domestic sphere, which he is attempting to respond to with an ambitious economic and social reform agenda that could lead to a sizable injection of money and resources.

At the same time, the Biden administration seeks to respond to more immediate strategic interests that allow the U.S. to compete with China for hegemony in the current geopolitical center of gravity — South and East Asia. This means competing in various areas, such as the space race, trade, and control of the semiconductor and high-tech supply chains. Another area of strategic focus for the U.S. is the growing tension with Russia which has been playing out in many of the countries where Russia has extended its sphere of influence from Syria to Ukraine.

Afghanistan and a humiliating defeat

The war in Afghanistan is the United States’ longest military conflict. This engagement cost the U.S. about 2 trillion dollars (the equivalent of Biden’s current economic rescue plan) and the lives of 3,500 U.S. soldiers and tens of thousands of Afghans who were killed and wounded in the poorest country in Central Asia. The U.S. invasion against the Taliban deepened Afghanistan’s internal contradictions – ethnic, tribal, and political – in an abhorrent war that bled the country dry. The United States is withdrawing from Afghanistan without achieving its main objective: to defeat Al Qaeda and the Taliban and help the Afghan people establish a stable “liberal-democratic” political system in line with its geopolitical and economic interests, as Afghanistan is a country rich in hydrocarbons and minerals.

U.S. officials acknowledge that the Taliban are at their strongest militarily and have stepped up attacks dramatically over the past year following military setbacks since 2015. Provincial capitals are routinely retaken by Taliban insurgents. The few remaining U.S. forces have been propping up a deeply unpopular Afghan government that has lost, or never earned, the trust of its people.

The U.S. military and coalition presence in the country generated hatred among the Pashtun population (majority ethnic group), the social base of the Taliban whose ideological and political objectives would culminate in the restoration of the caliphate they enjoyed between 1997 and 2001. The years of civil war and imperialist intervention have only left behind hunger and misery for the Afghans living under a corrupt pro-imperialist government.

U.S. imperialism has routinely sought military resolutions for the war conflicts that develop from its unilateral interventions in an effort to impose its interests. Yet the imposed governments that are either allied with the U.S. or directly under the tutelage of imperialism have never been able to address the underlying political tensions that drive these conflicts.

Thus we can see the proliferation of jihadist organizations such as the Islamic State in Iraq, Boko Haram in Nigeria, or Al Shabab in Somalia, and many other organizations in different countries which were strengthened over time in response to imperialist interventions.

Despite these contradictions, many of Biden’s interventionist critics point out that for Afghans the withdrawal could lead to a new social and political catastrophe, and demand to keep troops in the country. It’s true that the Taliban are unlikely to share power with the current government in Kabul. For example, just this week they boycotted a scheduled peace conference in Turkey, casting doubt on the whole future of the Afghan peace process. Taliban leaders refuse to recognize the Kabul government and will not even contemplate a cease-fire until a peace agreement is reached.

According to Foreign Policy’s Elise Labott, “Instead of leaving U.S. troops in the country as leverage for the Afghan government at the bargaining table, Washington is betting that a firm date for departure will push the parties to reach a final deal while increasing pressure on neighbors like Pakistan to use its sway over the Taliban to prevent a civil war. “

While this U.S. withdrawal has been compared to the departure of U.S. troops from Saigon in 1975 at the end of the Vietnam War for its geopolitical impact (notwithstanding the political and social differences of that war), the future for Afghanistan is uncertain. Labott suggests that a scenario similar to the post-Afghan-Soviet war that ended in 1988 is possible. That is, a civil war where there is no possibility of peace agreements, which resulted in the Taliban taking power in 1996.

The Taliban could argue that it is better to fight for full power than to negotiate for partial power within a system they repudiate: a “liberal-democratic” one, principles of human and civil rights formally enshrined in the Afghan constitution. The Taliban have already rejected the peace plan proposed by Afghan President Ashraf Ghani and have refused to endorse one proposed by the Biden administration. Should they return to power, their desire for Islamic laws will clash with the desires of people living in cities like Kabul which have developed a very different social structure than they had in the 1990s. For example, young people have access to the Internet and enjoy various democratic freedoms.

On the other hand, the U.S. withdrawal from Afghanistan may be seen by the world’s jihadists as a message that they can achieve victory against the world’s largest army. The Taliban’s strength in recent years has allowed them to build up new links. One example is the rapprochement with India or a growing closeness with China, which would have strategic geopolitical implications due to heightening tensions between China and the U.S. At the same time, many other neighboring countries are interested in pacifying Afghanistan in order to start infrastructure works and to extract natural resources from Afghan soil.

It remains to be seen how events will unfold. As Philippe Alcoy explains: “What the tragic example of the ‘endless invasion’ of Afghanistan teaches workers around the world is that imperialist intervention is always the worst option; it can only bring additional suffering to local populations, whatever the conditions and reasons for which imperialist powers intervene.” The United States has left a trail of extreme poverty and hundreds of thousands of lives lost in an attempt to avoid its hegemony from diminishing further. Paradoxically, 20 years later, the U.S. is still where it started and will likely move on to wage even more endless wars.

First published on April 15 in Spanish in La Izquierda Diario.