Undocumented Workers Are on Hunger Strike in New York City

Dozens of undocumented immigrants are on hunger strike in New York City — many of them essential workers who worked all through the pandemic. Part of the “Fast for the Forgotten” which began on March 16, the hunger strikers  are primarily vendors, restaurant workers and delivery service workers. They are demanding that the upcoming state […] 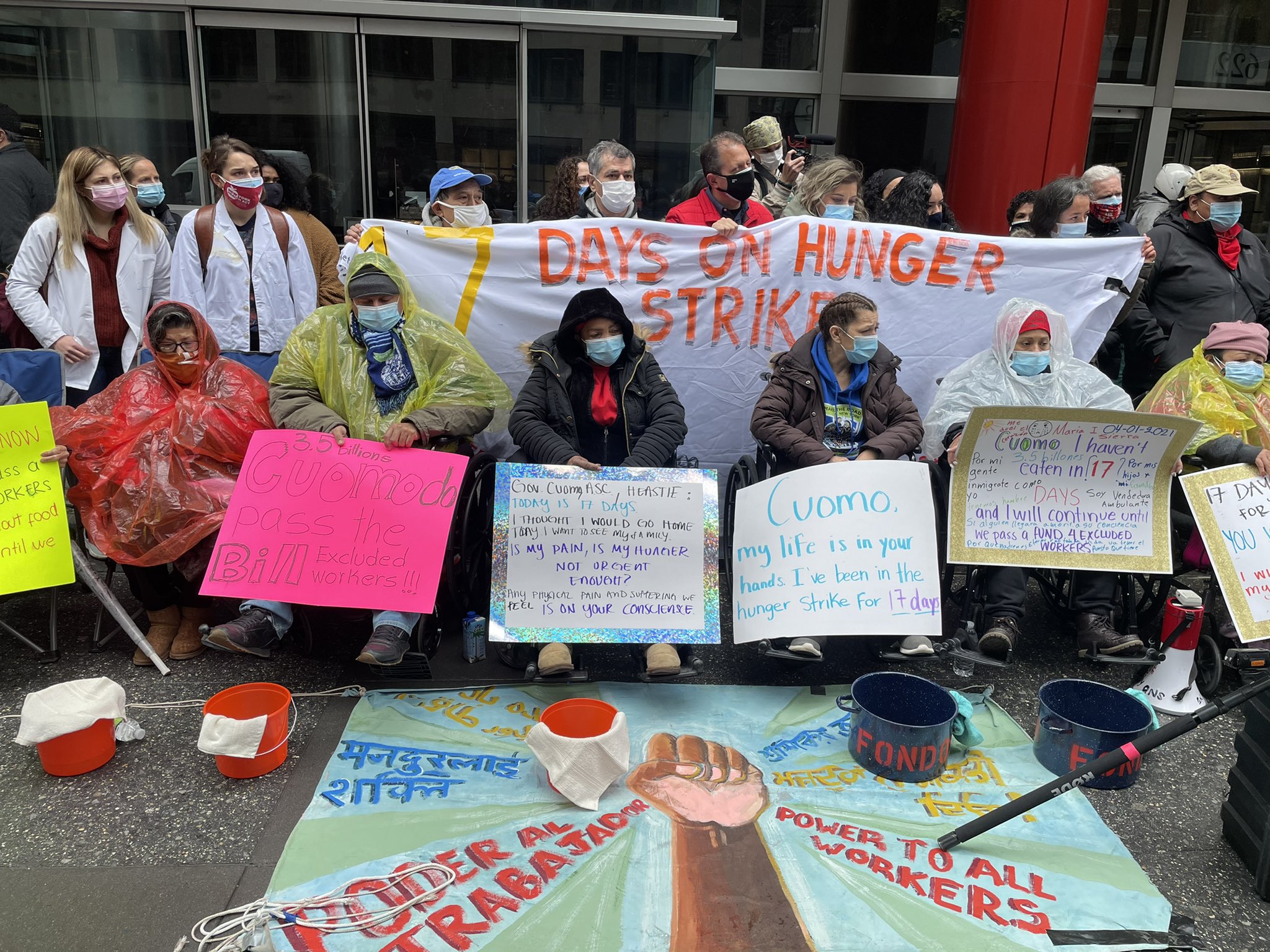 Dozens of undocumented immigrants are on hunger strike in New York City — many of them essential workers who worked all through the pandemic. Part of the “Fast for the Forgotten” which began on March 16, the hunger strikers  are primarily vendors, restaurant workers and delivery service workers. They are demanding that the upcoming state budget include a $3.5 billion fund for undocumented workers, who are ineligible for government financial assistance.

As one hunger striker told Left Voice, “ I want them to listen to us and help us. It’s just because we don’t have papers. We are also valuable. We are workers.”

The City reports that over 70 people have participated in the hunger strike to date. The strikers are subsisting on water and other liquids.

A hunger striker, Verónica Leal told The City “We’ve lived through so much this year, we’ve experienced so much need.” Leal recalled explaining to her teenage daughter why she wanted to participate in the hunger strike. “And if this group that is coming together to go on strike gets to win on their demands,” Leal said, “that means they’d have made a difference, not just for themselves but for thousands if not millions of people — and I want to be a part of that.”

The workers on hunger strike are a part of hundreds of thousands of undocumented workers in New York who have been ineligible for unemployment and stimus checks through the pandemic. They have been left out by Republicans and Democrats alike and have received no relief over the last year, including through Biden’s latest $1.9 trillion stimulus bill. The $3.5 billion fund that these essential workers are demanding would provide retroactive, direct cash assistance to workers who haven’t had access to aid yet.

In January, the budgets put forward by the New York State Assembly and Senate included $2.1 billion in funding for excluded workers, which falls below the $3.5 billion desperately needed. Governor Cuomo, on the other hand, did not include an excluded workers fund in his executive budget proposal.

On Wednesday, over 50 people blocked a road in front of City Hall. Hunger strikers carried signs explaining why they are on hunger strike, while other protesters carried signs demanding the cancelation of rent and help for undocumented workers. Not too long after, the police arrived and arrested 14 people who were blocking the road.

New York City has billions to spend on police to target protesters and hunger strikers. However, city and state officials claim that there isn’t any money for undocumented essential workers who are merely demanding the right to make a living.  But New York has the money. It’s in the police budget and it’s in the pockets of capitalists — the same capitalists who make billions off of the backs of these workers and are taxed at paltry rates. That’s why some protesters are also demanding to tax the rich.

A protester explained, “When this pandemic started, rich people in Manhattan were banging pots and pans. They were saying oh yes, our essential workers are heroes. But when it comes time to help undocumented people? … There are people here who can’t feed their children. They are going to food pantries because they can’t buy food… but these are the people who were delivering our UberEats, they were delivering our food. They were our nannies and our construction workers. Every single person who has ordered food should be out here supporting these people.”