On September 7, the University of Michigan’s Graduate Student Employment Organization (GEO) authorized a strike against unsafe working conditions due to Covid-19. The university immediately mobilized to end the strike, including filing a restraining order against the union and paying tenured teachers to take over graduate students’ classes. A participant in the strike shares their perspective. 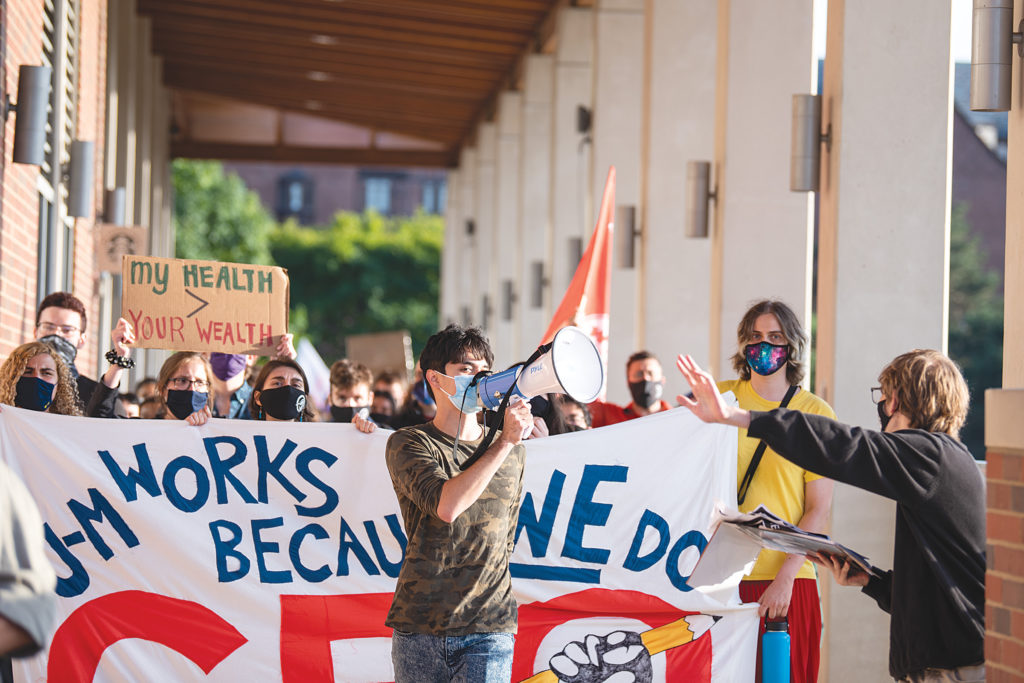 It is hard to sort through everything that happened before and during the Graduate Student Employee Organization strike at the University of Michigan. To articulate the data that supports our demands; or the way in which the University has been manipulative and deceitful; the way faculty deployed the language of social justice against graduate students in order to protect those already in power; the way that we were coerced and intimidated by legal actions and threats into ending our strike; the way the University reopening plan was necessarily compromised by University Regent Board Member Ronald Weiser, owner of the largest apartment and real estate company in the area, and his vested interest in a reopening plan that would allow him to continue obtaining student rent money; or any of the things that happened that I continue to fear speaking out about for fear of retaliation — each of these issues is entangled with broader systems of power and the tactics powerful organizations and people use to maintain and wield that power.

On September 7, the University of Michigan’s Graduate Student Employment Organization, or GEO, voted to authorize a strike to address campus safety issues. This decision came after months of meetings with University regents and HR, as well as open letters, protests, and requests to meet with Deans that were consistently rejected. Our strike consisted of both socially-distanced pickets on campus, as well as virtual pickets in which we worked on group projects for the strike over Zoom.

As a member of the Covid Caucus, a group that formed and began meeting in early April, I helped create our platform of campus safety demands (our full list of demands can be found here). Importantly, our demands were in line with University of Michigan’s own COVID-19 Ethics and Privacy Committee recommendations report— a report that the University ignored and suppressed.

My particular work centered around the demand for a universal remote work option that did not require medical documentation. University of Michigan’s initial policy was to offer a remote work option through ADA accommodations that only prioritize those who qualified as “high risk” according to the official CDC list. This list itself is insufficient— for example, while people who are immunocompromised from a solid organ transplant are covered, cancer patients undergoing immunosuppressive chemotherapy are not. The Accessible Campus Action Alliance, a group of scholars and experts in areas of disability studies, health equity, and institutional policy from multiple universities, advocates for the universal remote option more thoroughly in “Beyond ‘High-Risk’: Statement on Disability and Campus Re-openings.”

The GEO strike lasted from September 8th and ended September 16th— one week after the first offer made by the University to end the strike was rejected. The offer that we accepted on September 16th was not substantially different from the first one that we rejected— so why did the second pass while the first did not?

On September 14th, the University of Michigan filed for a temporary restraining order and injunction against GEO — a union-busting tactic that hasn’t been used for over 100 years — a legal action that would force us to stop striking or face severe penalties that would almost certainly destroy our union. “Going to the court was our only choice after learning that the strike would continue,” University President Mark Schlissel said, despite the fact that we had given him a road map to a resolution that aligned with the recommendations of his own Ethics Committee.

During the GEO membership meeting the night of the vote, members had an opportunity to voice their opinions on whether we should accept or reject the offer. None of the arguments that supported accepting the offer centered on its quality— it was very clearly a bad offer. Rather, our conversations centered on the ability of the union to survive the legal injunction, and the way in which the University’s legal actions could put individual members at risk. Although GEO accepted the University’s offer, it is a serious falsehood to say that we reached a “resolution.” Taking legal action that would abolish our union is not a form of good faith negotiation; it is intimidation and coercion. Nothing was resolved. Our demands are still our demands, and we are continuing to fight for them.

The fact that the University made a second offer that was nearly identical to the first offer we rejected shows the lack of seriousness in which they regard both undergraduate education and graduate student employee safety. University leadership, as well as some faculty members, concocted messaging that blamed graduate student employees for the strike, rather than taking responsibility for the unsafe working conditions that led to the strike in the first place. In the emails, press releases, and townhalls that led up to and during the strike, we watched President Schlissel and others in leadership make blatant lies about the reopening plan. We watched leadership insist that everyone who wanted to teach remotely had already been accommodated, even as we knew that many had not and were being forced to work in person, and even as we knew that this line deliberately attempts to eschew the responsibility to put a universal remote option policy in writing.

During the course of the strike, undergraduates, staff, and community members showed us tremendous support. The GEO strike was a moment in which we built solidarity across communities. Undergraduate RA staff began their own strike— without the protection of a union— in response to serious workplace health and safety concerns, and the dining staff planned a walkout. Concurrently, the Faculty Senate passed a vote of no confidence in President Schlissel, as well as a resolution to the University to withdraw the injunction against GEO and make a good faith effort to negotiate. After learning that undergraduate students who had been placed in University quarantine housing had not been given basic supplies like food or soap, GEO began organizing to make sure they were receiving food and supplies.

What stood out to me most about this solidarity building is the way in which it highlighted differences in class and power. Although I don’t know of any tenured faculty members who cancelled class so as to not cross our picket line, I know of some who scabbed, and received extra compensation for, classes taught by graduate student instructors. I saw the way in which those whose precarity put them at risk— lecturers, staff, international students, and undergraduates— joined our picket line in solidarity to work together for a safer campus. I saw, and was deeply honored by, the way in which construction workers from local trade unions did not cross our pickets, even though they would not earn wages for those days, out of respect for our union. I don’t have easy takeaways that I can articulate about this experience safely. But I do have a renewed faith in the way that workers and their communities can come together to support each other when those in power turn their back on us to engage in a form of magical thinking that puts profit over human life.