What Are Unions and Why Do They Matter?

With unions making headlines in the last few months, it’s crucial to reflect on what unions are, where their power comes from, and what possibilities they hold. 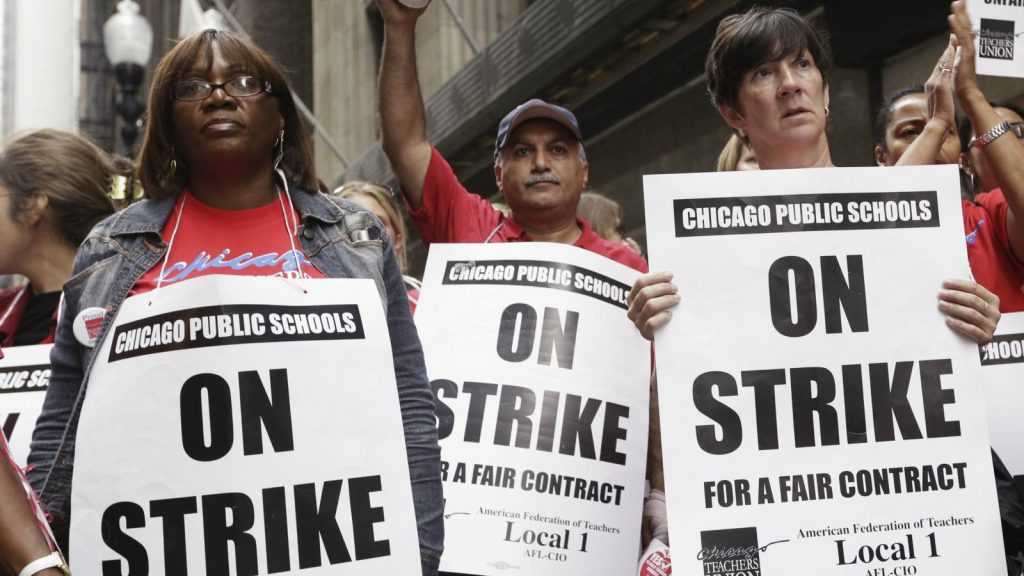 Unions have been making headlines lately.

In Bessemer, Alabama, 5,800 workers are fighting for the first Amazon union in the United States. This pits them against the third biggest private employer in the world and the second biggest in the country. Amazon — which has raked in billions in profits during the pandemic, and whose CEO, Jeff Bezos, made billions in a single day — is doing everything it can to shut down the unionization efforts. It’s terrified that Bessemer could be a spark that catches at other Amazon warehouses.

Other unions have been in the headlines too. In New York in January, Teamster Local 202 went on strike against the biggest wholesale distribution market in the world, and it won higher pay, more sick days, and more personal days.

When teachers in Philly and Chicago threatened to strike for a safer reopening, they won important concessions like teacher vaccination and better building ventilation. And a few years ago, a wildcat teachers’ strike shut down every public school in West Virginia, also winning important gains.

But what exactly is a union, and why do unions matter?

Unions and and the Power of Workers

Whether it’s on the floor of a massive Amazon warehouse, at the front of a classroom, or in a “mom and pop” shop, a single worker has very little power to make real change at a job. But in a union, workers band together to use their collective power to force bosses to make changes to things like pay, hours, benefits, and working conditions.

Many might think unions are for white, male workers slaving away in coal mines or lead smelting plants. But as Kim Moody points out in On New Terrain, women, as well as Black and Brown people, are more likely to be unionized than any other group. And the biggest growth in union demographics in recent years has been among Latinx people. Bessemer is a case in point. The organizing at the warehouse there is being driven by Black workers, many of them women, in a majority-Black city, as part of a campaign that began amid the Black Lives Matter uprising last summer.

And throughout union history, women and people of color have been anything but on the sidelines. In the United States alone, the Black-led Dodge Revolutionary Union Movement (DRUM) helped drive the struggle of the working class in Detroit in the late 1960s, and women were on the front lines of the fight against capitalist exploitation in textile mills in New England in the 1830s.

Unions have power because all of the bosses’ profits come from exploiting workers. In capitalism, workers are paid a wage for the work we do. But bosses only turn a profit if we create more money for them than they shell out for wages and things like machinery, repairs, and rent.

Unions are crucial because they’re the main form of worker defense against these attacks. Since all profits come from exploiting our work, our labor is our main weapon and leverage. Unions can use strikes, sick-outs, slow-downs, and other tactics to cut into the bosses’ profits, to try to force them to make concessions and win more control for ourselves over the profits we generate.

And in unions, workers are able to negotiate collectively with the bosses. Members pay dues for things like union representatives and strike funds, and union reps can settle legally-binding contracts with the bosses that set certain levels of pay and benefits, among other things. This process is called “collective bargaining.”

In most unions, though, the first fight is to be “recognized” the first place: to make the union the legal body that the bosses have to negotiate with. That’s what workers in Bessemer are fighting for right now. Due to the backwards labor laws in the United States, recognition means holding an open election where workers vote for or against forming a union, all while the bosses are given huge leeway to interfere.

Amazon is making the most of this fixed carnival game. It’s flooding workers with anti-union pamphlets (even in bathroom stalls) and multiple anti-union phone calls a day. The company is even manipulating traffic lights to keep workers from stopping to talk to union organizers. None of this is a surprise: Amazon’s massive profits are based on how much it can exploit its non-union workforce.

Amazon is fighting so savagely because unions work. People in unions make, on average, significantly more than non-union workers, and are far more likely to have work-related healthcare. In fact, it was the militant fight of unions throughout the 1800s and 1900s — in strikes, street-fights with strike-breaking cops and the bosses’ hired thugs, and more — that led to the outlawing of child labor in the United States and beyond, and to weekends off, employer-provided health benefits, and paid sick leave for many workers. We have much more to win. But we can’t forget we’re standing on the shoulders of the unions that came before us.

Some of the major unions and union federations have long pushed for a “pure and simple” unionism that focuses just on economic, “bread and butter” issues. But unions aren’t just tools for winning better pay or conditions. There is a long history of unions fighting for far more radical change. In the South, for example, Black workers developed a powerful tradition of “civil rights unionism” that fought not just for economic gains but also for voting rights and against racist violence.

That tradition is weaker today, but it lives on. We see it still in the one-day strike for Black lives by the ILWU dock workers this past summer. And we see it in the struggle by rank-and-file members of the SEIU to kick cops out of unions since they’re tools of white supremacist capitalism.

Over the last few decades, unions have been under constant attack. Just after World War II, almost one in three workers were in unions. Today, only about 11 percent of the workforce is unionized. The numbers are even lower in the private (non-government) sector, topping out at just 6 percent.

But we shouldn’t be dazzled by these numbers. Union rates are low, but that still means that about 14 million workers are in unions. And many of those are in key strategic positions across the economy, from automotive production to transportation, from healthcare to education — and the pandemic showcased how important the last of these two can be.

The attack on unions has come from the bosses, who have automated many jobs away, closed factories to ship them to the less unionized South or abroad, and so on. And it’s come from Republican and Democratic politicians, too. Republican Ronald Reagan signaled the start of the all-out assault on unions in 1981 when he led a brutal attack on the air-traffic controller union’s strike. A little over a decade later, Democrat Bill Clinton signed the NAFTA trade agreement into law, making it easier for corporations to bust unions by moving production over the southern border. When Obama was in office and Democrats controlled both the House and Senate, Democrats put pro-union legislation in a drawer to rot.

But unions also became weaker because of bad leadership. Union members face a barrage of legal barriers: not only is labor law a fixed carnival game to help the bosses, but Democrats and Republicans have outlawed strikes and work stoppages for certain workers in states like New York, trying to keep workers from using their main weapon. Union bosses have responded to this by mostly giving up on the strike and begging for scraps at Democrats’ tables.

Those bureaucrats hope that lobbying, and getting out the vote for Biden, Obama, and Clinton, and local politicians, will win power instead. This strategy has been a complete failure.

It’s crucial to remember where our power comes from as workers: our work, and our ability to stop working. Hunts Point Teamsters and West Virginia teachers know they only won because they were willing to fight using their power as workers.

With all eyes on Bessemer, Alabama, we should remember the lessons from Hunts Point and West Virginia. We need more unions, we need bigger unions, and we need fighting unions.